Most Popular Tarts All Around The World

A rich filling of cooked wheat berries, ricotta, and pastry cream, enriched with candied orange peel and flavoured with orange blossom water, retains the delicate buttery crust of this classic Neapolitan tart. For Easter, Pastiera is usually loved, though it is said that its origins are traced back to pagan times. 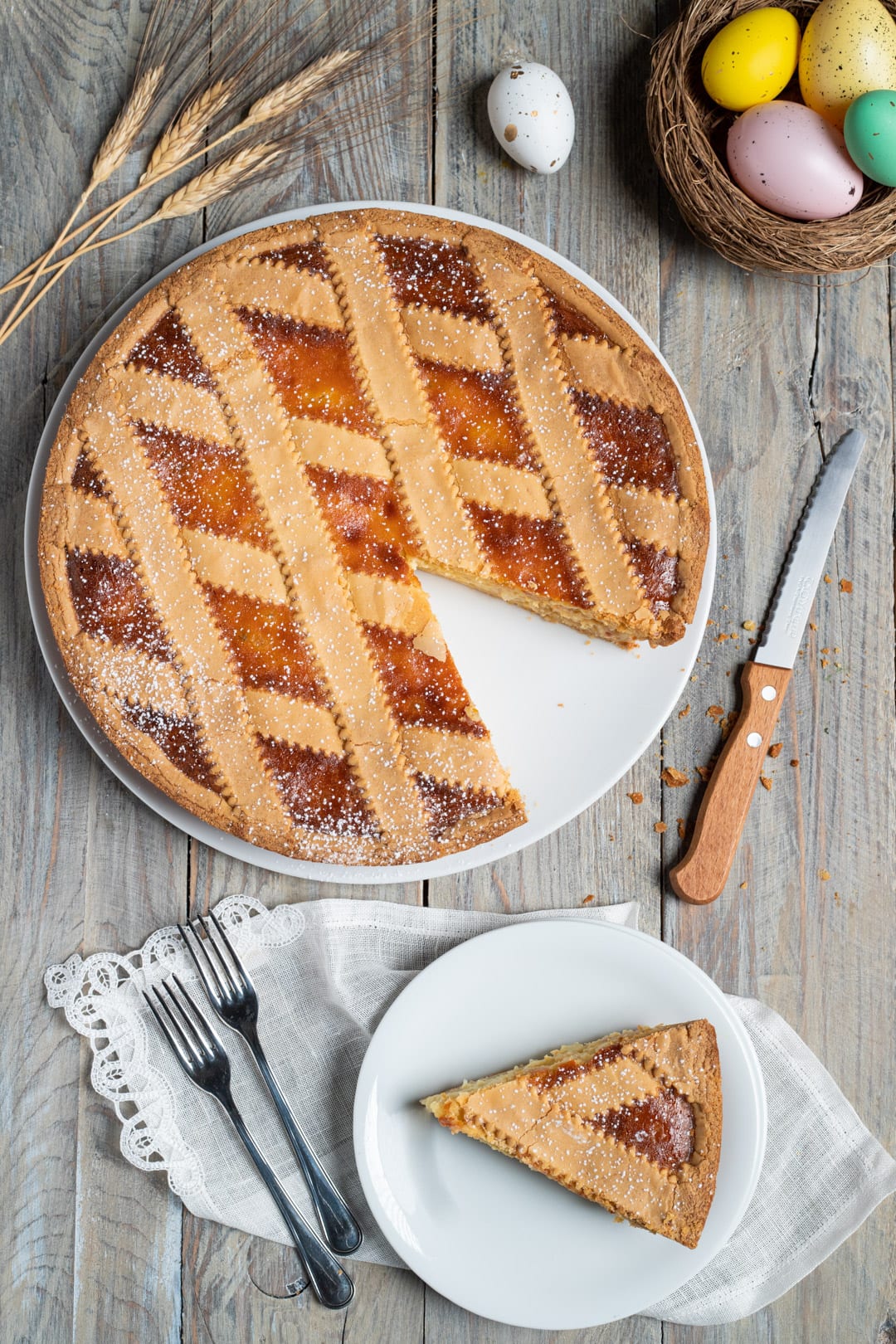 According to one tradition, the priestesses of Pompeii would prepare similar wheat pastries to mark the return of spring as an offering to Ceres, the Roman goddess of agriculture, grain crops and fertility. The pastures we know today, however, originated in the convents of Naples.

Traditionally prepared between Holy Thursday and Easter Eve, it was seen as a sign of regeneration, rebirth, and new life – a tradition that continues to this day.

Pastel de nata is a traditional custard tart with Portuguese eggs that is popular all over the world. It is assumed that the filling should not be too sweet for the best result, and should not have lemon or vanilla flavors. Instead, sprinkle the tart with cinnamon and, preferably, mix it with a cup of coffee.

This treat was originally made by Catholic monks and nuns in Santa Maria de Belém in Lisbon prior to the 18th century. The tart was made from the leftover egg yolks used in wine clearing and clothing starching. Later on, to start selling pastel de nata commercially, the clerics made a contract with a nearby bakery, and the product was a big hit.

The classic egg tart, a delicious pastry consisting of a flaky outer shell with a creamy yet firm egg custard in the middle, is one of the most popular Chinese desserts. The root of this Chinese traditional dessert is unclear. It is believed to have originated from Chinese connections with Western culinary practices, but some type of egg custard is also likely to have existed before the West’s influence. Chinese egg tart variety is believed to be a cross between the classic British egg custard, which is much creamier than the Chinese tart, and the famous Portuguese tarts, known as pastéis de nata, which are especially popular in Macau. 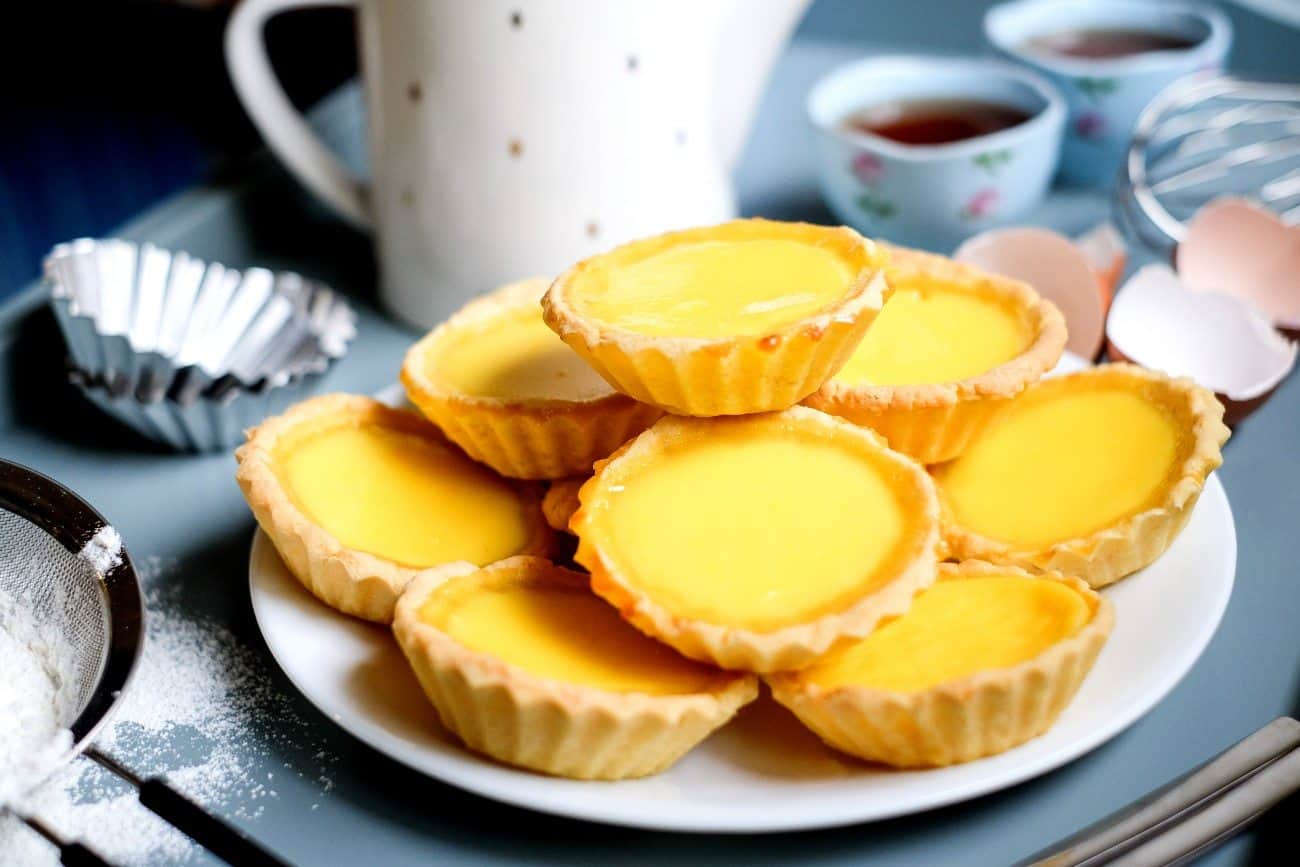 In the Chinese area of Guangdong, egg tarts first appeared and were eventually brought to Hong Kong and Singapore, where they also became one of the most beloved desserts. The rich cream, which is firm and dense, with a strong and enhanced egg taste, is the primary feature of the Chinese variety. It is possible to use both crumbly shortbread pastry (generally made with lard) and crunchy puff pastry as a shell. These tarts are occasionally flavoured with ginger or green tea and should always be served sweet, straight from the oven. Egg tarts are the basic dessert of any dim sum meal, and are usually served in Cantonese Asian restaurants as a sweet delicacy.

In traditional Chinese bakeries and coffee houses throughout the world, these tiny treats can also be found.

This Italian dessert consists of cheese or cream and, similar to fruit-filled pies, fruit in a crusty pastry. Cherries, bananas, apricots, or peaches are the most widely used fruits in crostata. It can be served as an open-faced dessert or, usually in the form of a lattice, covered with a top crust.

The Latin crustata, meaning crust, derives its name from it. In cookbooks such as Libro de Arte Coquinaria by Martino da Como and Cuoco Napolitano, both from the 15th century, you can find the earliest mentions of crostata in print.

In the south of Italy, crostata di ricotta is the most common variety of crostata, while northern Italy prefers the smooth, fruity crostata that originated in Rome. Other varieties of crostata, such as crostata al limone (with limon) and crostata di marmelata, are also available (with fruit jam).

Crostata can be eaten with a dollop of whipped cream, or even with a swirl of ice cream, without toppings. 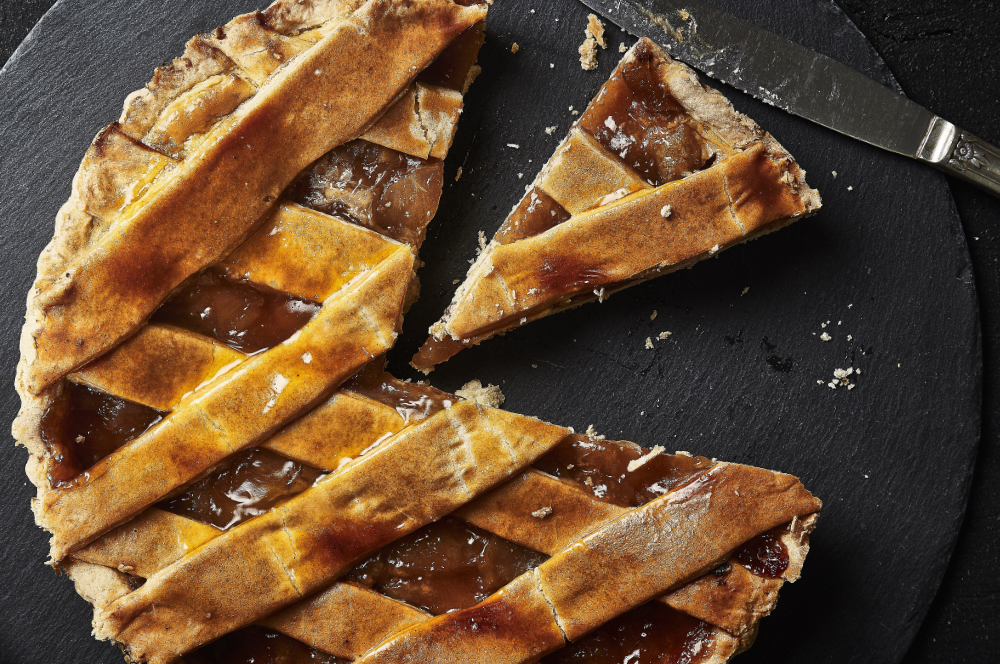 Pastel de Belém is a traditional custard tart made from Portuguese eggs and a precursor to the popular pastel de nata. A pastry shell that is filled with a mixture of milk, eggs, sugar, lemon, and cinnamon is made for the tarts. The first recipe for pastel de Belém dates back to 1837, when the monks of the monastery of Jerónimos made it. 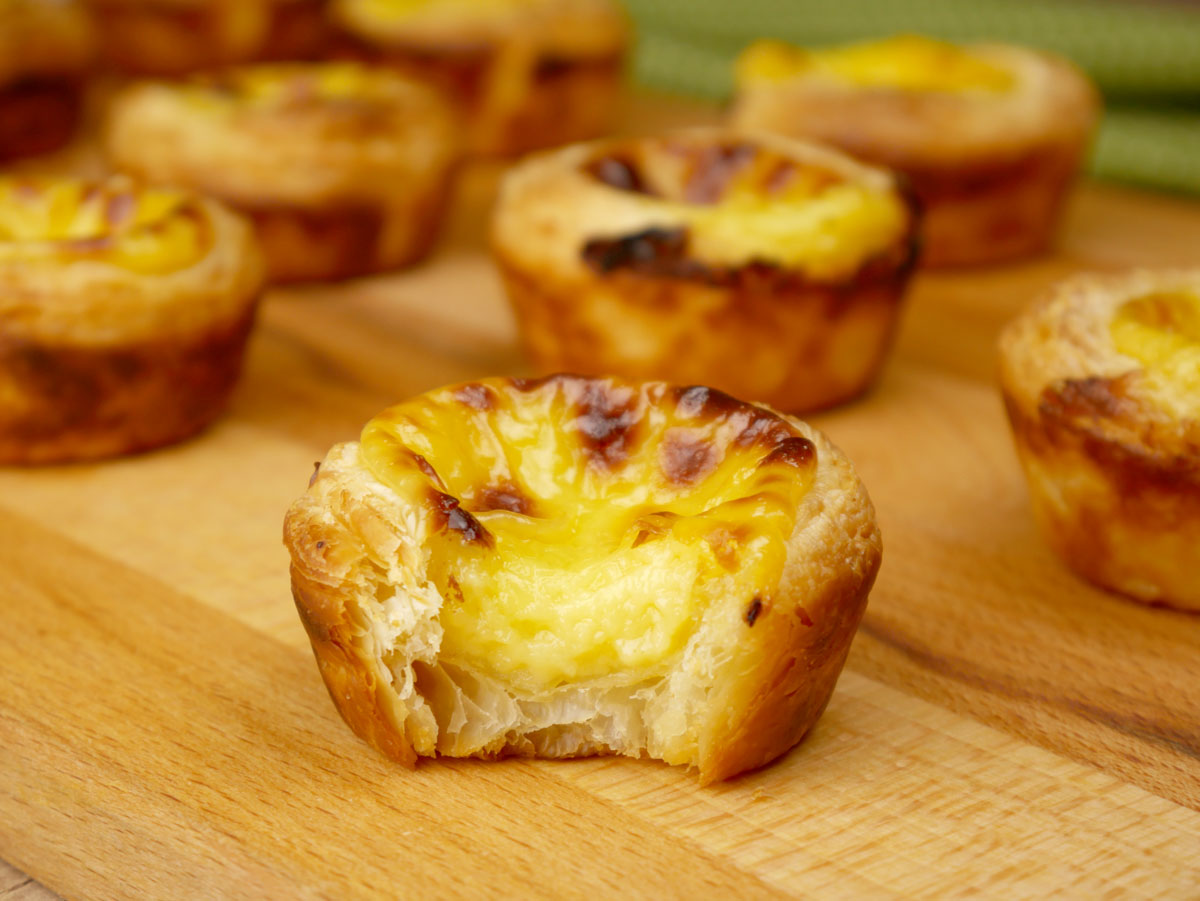 Pastel de Belém can only be called the custard tart produced at the Fábrica Pastéis de Belém, while all the other pastels produced at other pastry shops in Lisbon are called pastel de nata. These tarts can be eaten hot or cold regardless of the name, and in 2009, The Guardian listed pastel de Belém as one of the world’s 50′ best things to eat ‘.

Bakewell tart is a typical English dessert made up of fruit jam-filled shortcrust pastry and a mixture of sugar, eggs, ground almonds, and butter. The tart is perfectly baked to keep it light and moist, and it is usually served warm, with a dollop of cream or an ice cream scoop on the side.

The name of the dish, referring to the numerous wells that used to flow in the Bakewell region of Derbyshire, is a corruption of the words bad (bath) and kwell (source).

Butter tart is a modest food in early 20th-century Canada that gained iconic status. Traditionally, they are made with a mixture of walnuts, eggs, brown sugar, butter, and white vinegar, which are then put and baked in thin, flaky, deep or shallow tart shells. 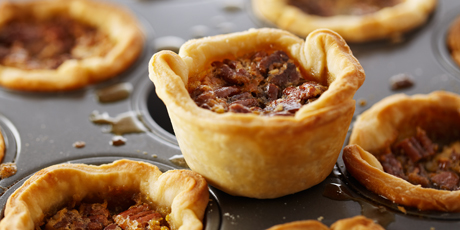 The early versions of the recipe, dating back to 1915, indicate that the mixture may also contain currants and raisins. There are several hypotheses about the origin of the tart-some suggest that it is related to the pecan pie that American slaves brought to the country, others say it originated from the sugar pie of Quebec, while others say it is related to southern Scotland’s Border Tarts.

Whatever their roots, butter tarts are particularly common today in the provinces of Ontario and Nova Scotia. The color of the baked tart depends on the darkness of the brown sugar used, and depending on personal preferences, the filling on the inside may be either strong or runny (for a runny tart, the cooking time is shortened).

This French classic comes from Normandy, a region renowned not only for its apples but also for its apple liqueur from Calvados, both of which are important ingredients of tarte Normande and make the perfect match for the delicately sweet filling of frangipane almond cream, while the base is made of pâte brisée or shortcrust pastry. 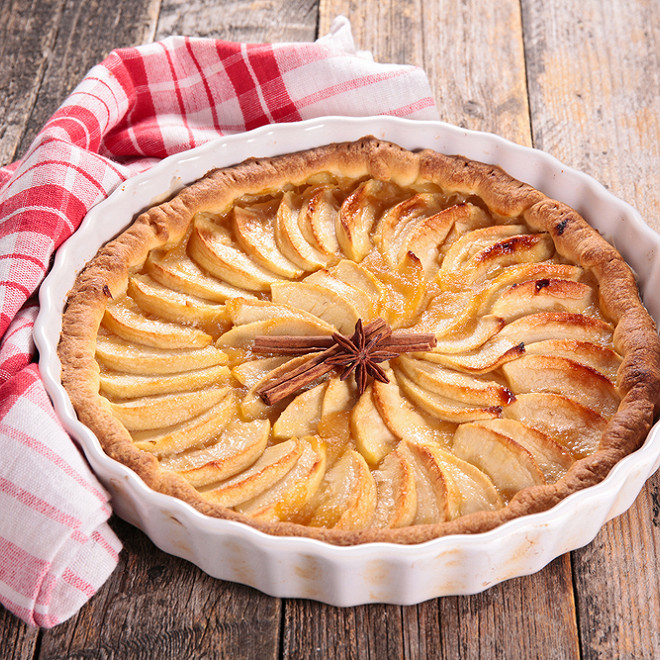 Norman apple tart is usually served on the side with a dollop of crème fraîche, and although still soft, it is best enjoyed.

Treacle tart is a typical British dessert filled with sugar syrup, breadcrumbs, and lemon juice, consisting of a shortcrust pastry. Originally, treacle was the cheapest sweetener, but food historians say the dish was invented as a way to use extra bread for peasants. With a dollop of clotted cream, whipped cream, or a few scoops of ice cream on the side, this classic dish is usually served hot.