Most Popular Picklings In The World

As the main ingredient, this fermented kimchi variety is made with green onions (scallions). A fiery mixture of chili flakes, fish sauce, ginger, garlic, and anchovy sauce cleans the onions and then coats them. Optionally, a rice flour base may be used to make the paste, while sesame seeds are usually sprinkled as a garnish.

When prepared in spring, when green onions are in season, pa kimchi is best. It is commonly enjoyed as a banchan – a popular side dish from Korea

Baechu (Napa cabbage) is one of the essential kimchi varieties in South Korea, and it is often almost synonymous with the word kimchi. Although the dish can differ significantly, most variations are made with whole Napa cabbages that are generously coated with a blend of glutinous rice paste, gochugaru chili pepper flakes, garlic, onions, jeotgal (fermented seafood), fish sauce, and ginger, while sliced radishes, carrots, or green onions, as well as other seasonings and condiments are also popular additions. 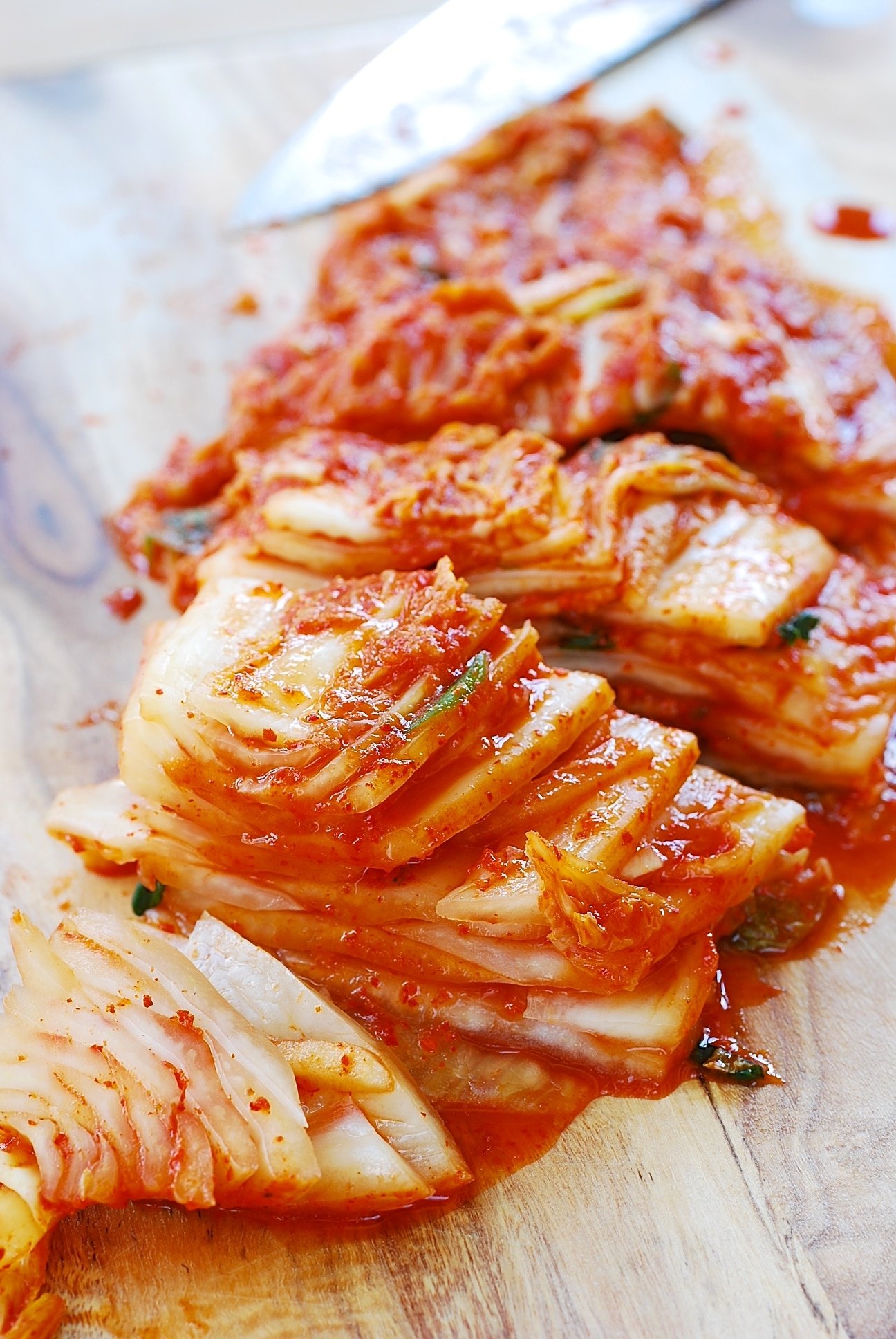 Baechu is also traditionally made, like most kimchi varieties, in onggi, an ancient Korean earthenware suitable for fermentation. Kimchi should be left for at least a few days, ideally longer, when cooked, allowing it to ferment and achieve its usual spicy-sour taste. Baechu is often eaten as a banchan (side dish), but it is also widely incorporated into soups and stews.

Pickling food in China is an ancient practice that dates back to the period of the Zhou dynasty, and there are more than 130 different kinds of Chinese pickles today. Home pickling is so necessary that only for the preparation of this flavorful appetizer or side dish are also special porcelain urns used. 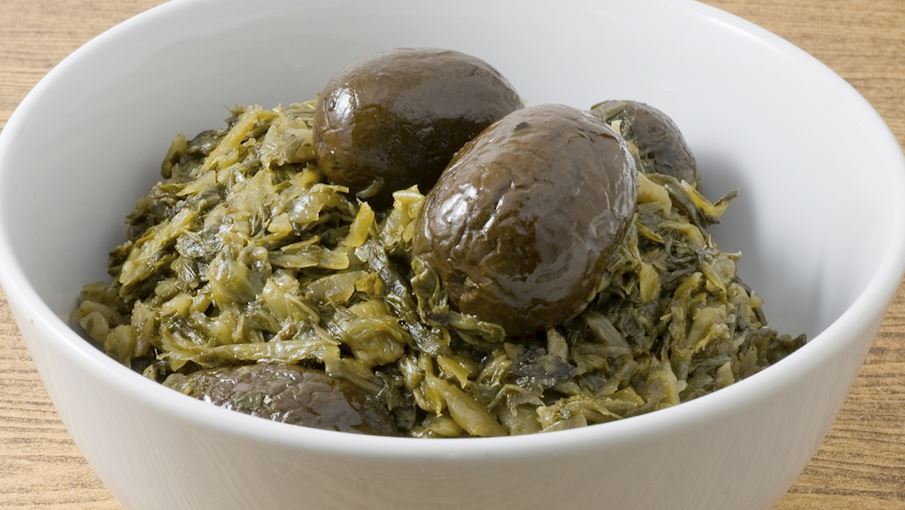 Most notably, cabbage, eggs, lettuce cores, cucumbers, mustards, radishes, and bamboo shoots are the pickled components. In order to give the pickles a special taste, the ingredients are pickled in a mixture of water and vinegar that can be enhanced with anything from Sichuan peppercorns to ginger.

They are often used as a palate cleanser if served on the hand. The only important thing, regardless of the countless variations of Chinese pickles, is that they are all incredibly flavourful and have a selection of main dishes with extra crunch.

Takuan is Japanese daikon radish pickled, and as such it belongs to the tsukemono pickle community. The Japanese daikon has sweet and mild flavors and is very crunchy. Usually, it is sun-dried, seasoned with salt and various spices, then left for a few months in the pickling solution of turmeric, vinegar of rice wine, sugar, salt and water. 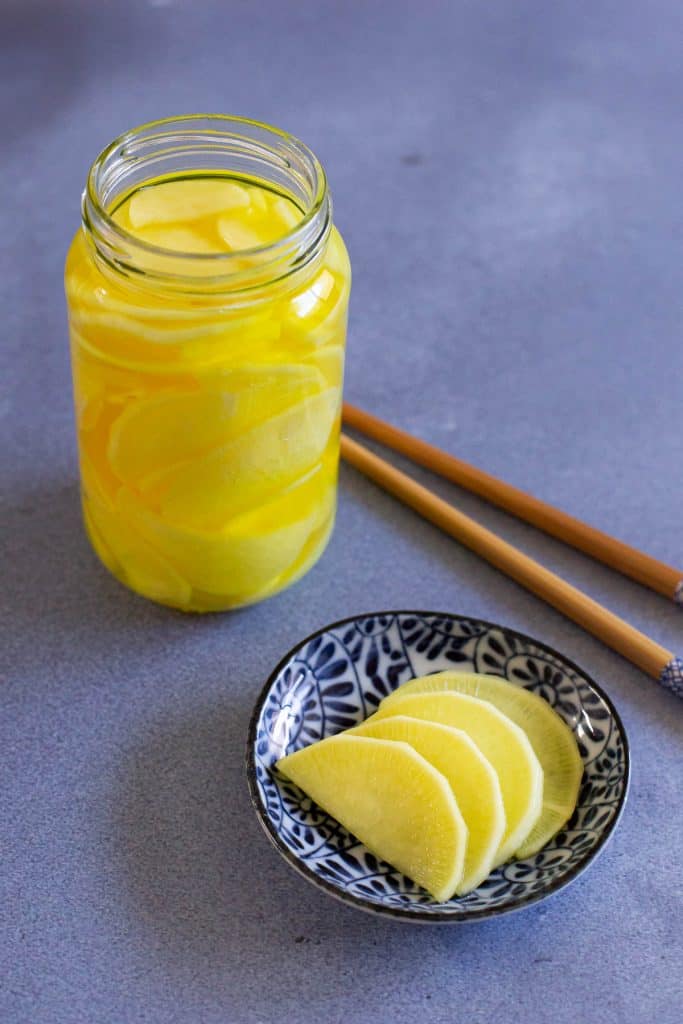 The daikon is yellow in color and mildly pungent when finished. Takuan is smoked in Akita Prefecture, and it’s known as iburigakko. Takuan is renamed danmuji in South Korea. It is commonly eaten with or used with other tsukemono pickles in salads, stir-fries, and as a sushi ingredient.

At the end of a big meal, Takuan is also often eaten because it helps digestion, or as a snack at teatime.

Italian mostarda, sometimes described as something between a relish, a chutney, and a pickle, is a sweet and spicy preserve of fruit traditionally served with meats, especially poultry and game. It is also an important accompaniment to an assortment of boiled cuts of meat called bollito misto in Northern Italy.

Spooned over sharp cheeses that can stand up against its zesty crunch, Mostarda can also be enjoyed. The tradition of this condiment dates from the Middle Ages, when it was made in Italian with cooked grape must, or mosto ardente, hence the name mostarda.

However, the pungent kick today comes from either mustard oil or mustard seeds, sometimes whole or powdered, added to fresh, dried, or candied fruit. While countless modern varieties are available ready-made from this famous fruit preserve, nothing compares to a homemade mostarda.

Traditionally, it is prepared using fresh, seasonal fruits such as white watermelon, fig, plum, prune, apricot, apple, pear, quince, or even pumpkin during the end of summer and well into the fall.

Acar is a typical mixed pickle of vegetables that typically consists of cabbage, carrots, cucumber, or long beans, generously spiced with chilies and shallots in slices. Before they are combined with salty, slightly sweet water and vinegar brine, all the vegetables are sliced into thin strips or diced into larger chunks.

For noodles and rice, Acar is used as a topping or as an accompaniment to grilled or fried dishes and curries. Acar varieties are distributed across Indonesia; various spices and fruits such as mango or pineapple are also added. In Malaysia and Singapore, where it is usually made with a spicy peanut paste, Acar is commonly prepared.

Since only a small amount of vinegar is used, this Indonesian take on pickled vegetables is considered special, so the prominent taste is not merely sour, but refreshing and clean.

Nattō is a rare Japanese dish made up of fermented soybeans. The fermentation process is time-consuming, but very simple as it uses merely soaked soybeans and the bacterium Bacillus subtilis, known as nattō-kin in Japan.

A distinctive texture of firm beans paired with glutinous strings that keep the beans together results in the final goods. The dish becomes more viscous when vigorously combined, providing a special eating experience. Nattō has a pungent, distinctive smell because it is made by fermentation, often compared to that of a solid, aromatic cheese. It may also have a mild smoky taste, depending on the variety. This unique Japanese formation was originally created by storing soybeans in rice straws, creating the bacteria naturally. It is typically factory-made in regulated environments today, and sold in packed containers in supermarkets.

In East Japan, Nattō is particularly common, and is rarely found on the western side of the world. The Japanese tend to integrate it into typical Japanese-style breakfast, where nattō, followed by fish produce, miso soup and tofu, is usually put on top of rice.

It is often used as a condiment, as a tofu topping, spread on a bread slice, and even incorporated into sushi. Nattō is often topped with sliced scallions when consumed as a food on its own. Usually, coagulated sauce, mustard, or soy sauce are used in the store-bought packets, which are then combined with the beans.

Despite its distinctive smell and the unique texture, this ancient Japanese dish has numerous health benefits, and its popularity is rising in and outside Japan.

Turşu is the common name for all kinds, sizes, and colors of a number of Turkish pickled vegetables, including eggplants, zucchini, onions, carrots, cucumbers, beets, garlic, and grape leaves. The vegetables are placed in a vinegar and brine container, then preserved for a couple of months. 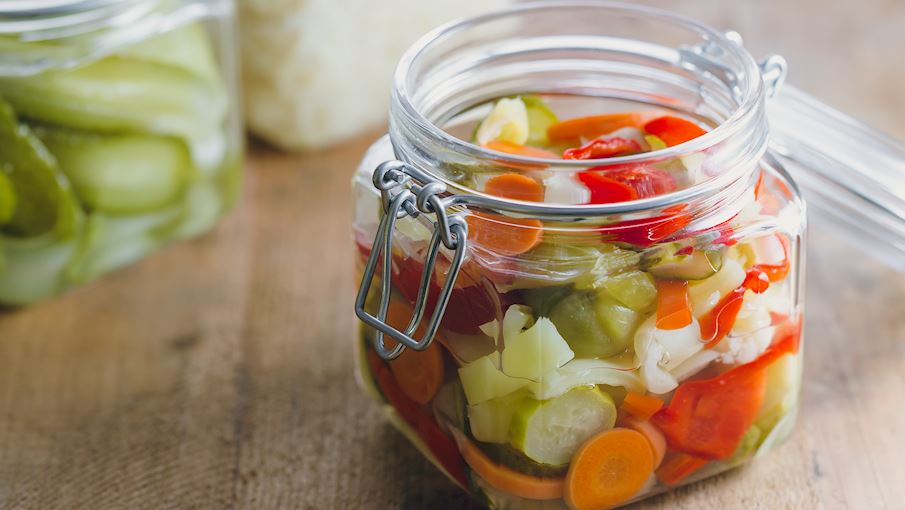 The custom of pickling goes back thousands of years, throughout the winter months, when fresh vegetables were stored for consumption during the year. Turşu is sometimes eaten as an appetizer, while turşu suyu, the flavorful pickle juice, is often served on hot summer days as a refreshment. 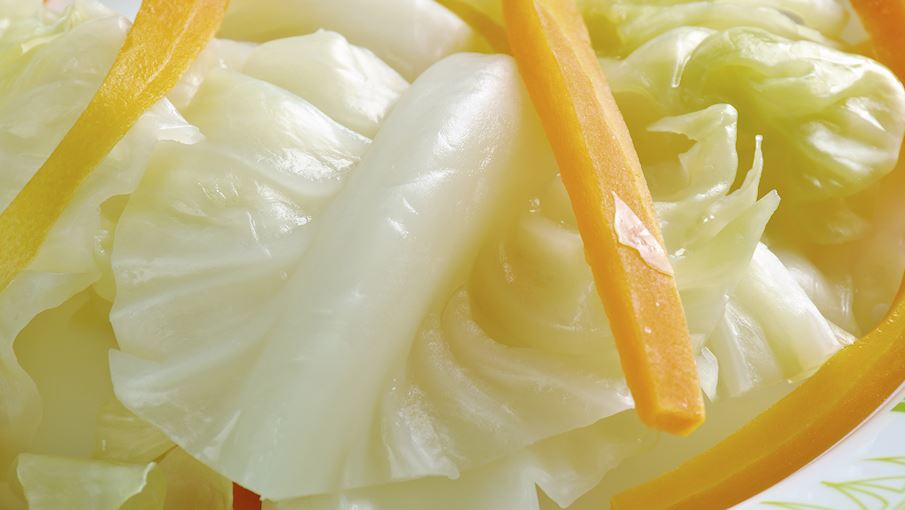 These crunchy, tangy pickles are often on hand in Sichuan cuisine, and almost every family keeps a large clay pot in their kitchen, filled with a variety of seasonal vegetables seasoned with salt, sugar, and Sichuan peppercorns in a clear water and vinegar brine.

In northern and western China, the sweet, sour, and spicy pào cài are most popular, but are also easily found throughout the country in restaurants. It can be eaten with noodles or Chinese dumplings, but congee, a silky, savory, slow-cooked rice porridge that is common in China and many other Asian countries as an everyday breakfast meal, is most often enjoyed.