The varieties are abundant and can include different additions. In several other variations, the sauce can also appear, and can differ greatly in sweetness and spiciness. Numerous restaurants and street stalls encourage consumers to select and adapt the ingredients to their choice for the variety they prefer.

Larb is a highly seasoned meat salad that is garnished with toasted ground rice and freshly chopped herbs and khao khoua. Larb was first invented in the Chinese province of Yunnan, considered Laos’ unofficial dish, but became profoundly rooted in Lao cuisine, eaten both in Laos and the neighboring Isan, a region in Thailand. 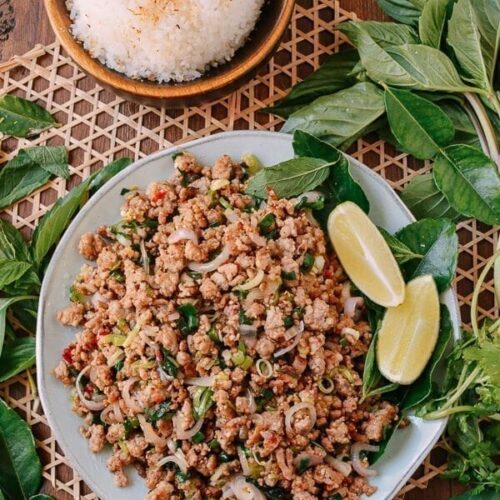 The base of the dish is hand-minced meat that can be raw or fried, either beef, pork, chicken, duck, or fish, a souring agent – usually lime juice, and a form of fermented fish sauce, either fish sauce and/or padaek. The basic recipe’s ingredients and variations are infinite, and similar dishes can be found all over Southeast Asia.

Wrapped in lettuce or with a piece of sticky rice and cucumber slices on the side, Larb is usually served.

Steamed fish in banana leaves is a dish typically associated with Luang Prabang that combines flaked fish with sticky rice powder, fish sauce, as well as various spices and herbs such as kaffir lime leaves, chili peppers, and lemongrass. The spices are normally ground in a mortar and then mixed into a mixture that is neatly wrapped within banana leaves with the fish and other ingredients. 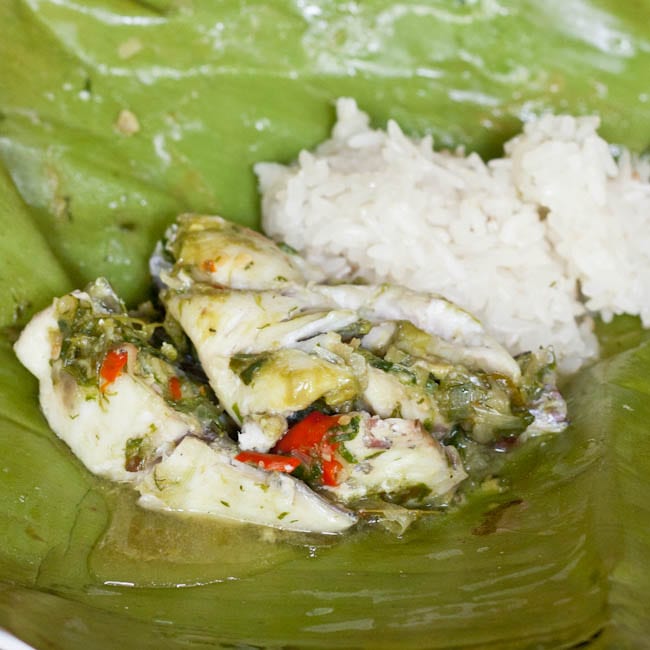 The dish can be placed in slim, individual-sized packets or whole banana leaves, and it typically comes served with rice and a side dipping sauce. While it is possible to use different fish species, catfish is the most common choice in Laos.

Luang Prabang is traditionally associated with this versatile Lao stew. The dish traditionally blends chunks of meat with traditional Laotian spices such as lemongrass, cilantro, dill, basil, galangal, and sakhan, the stems of wild vines that offer a peppery, spicy flavor or lam. 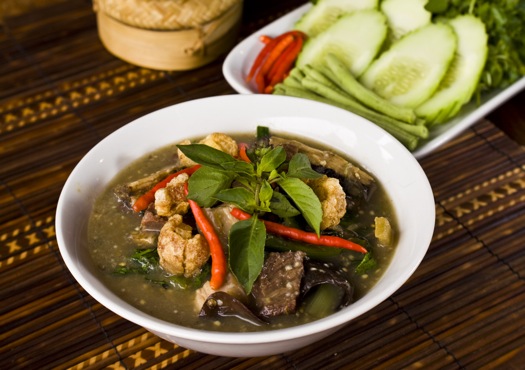 Other ingredients include broth-based onions, garlic, and eggplants, while the dish is finished by adding rice balls, various vegetables, and grilled meat, typically beef, water buffalo, pork, or chicken, although fish may also be included in some less common varieties.

Because of the addition of sakhan, which was later replaced by chili peppers, it is assumed that o lam emerged sometime before the 1600s.

In Laos and Northern Thailand, Khao niao, meaning sticky rice, is extremely popular as part of regular food combinations. It is so profoundly rooted in the culture of the country that the Lao people often refer to themselves as “children or descendants of sticky rice” 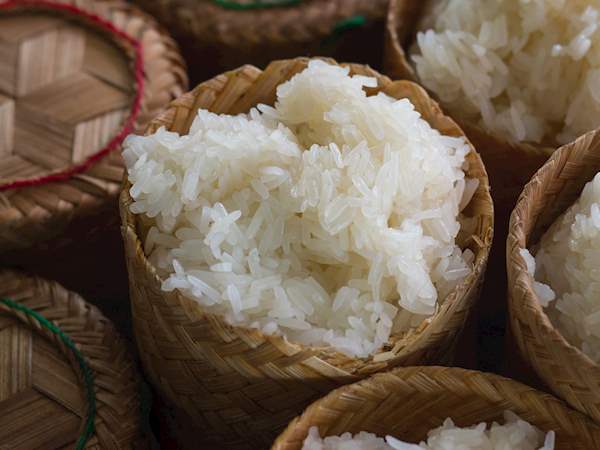 Making the dish requires letting the rice soak overnight in water, then steaming it the next morning over a charcoal fire and placing it in small baskets after it cools down. It is eaten by hand, either alone or as part of a more extensive meal, without utensils.

It’s quite a heavy dish, so it’s usually recommended by Lao people not to eat it at night.

Lao Lao is a spirit distilled from glutinous (sticky) rice that is fermented. The beverage has a long history and comes from rural areas of Laos. The development of this clear spirit is often wrongly labeled as Lao whiskey, and there are several regional varieties that often differ considerably in taste, color, and consistency. 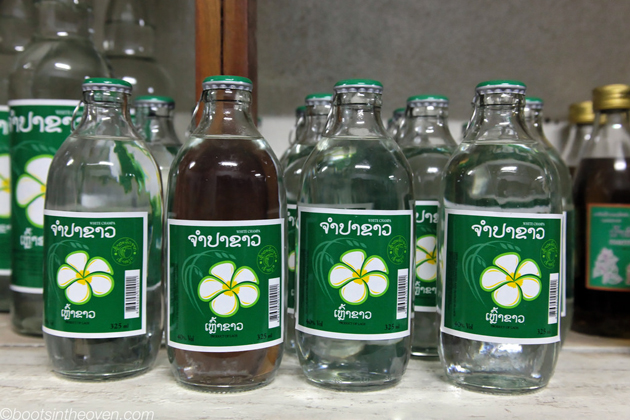 Most examples are clear, colorless, and quite potent. Bottles containing snakes, insects, or scorpions are also available but are mainly sold as souvenirs. Lao Lao is still mainly produced as a home-brew, and it is traditionally served with meals.

Nam khao is a crispy Lao salad that consists of shredded and mixed deep-fried rice balls with different condiments and toppings. While it occurs in various regional varieties, it mainly uses sour som moo pork, sausages, different herbs, and sliced shallots in addition to rice balls.

With a flavorful dressing, the whole salad is always generously seasoned, then topped with chili peppers and chopped peanuts. At many food stands and grocery stores throughout the country, this healthy, time-consuming national favorite is readily available.

A spicy pork sausage flavored with an array of local aromatic herbs and spices is Sai oua. Common in Laos and northern Thailand, to produce a contrasting and layered dish, the sausage is typically served alongside another regional favorite – sticky rice. 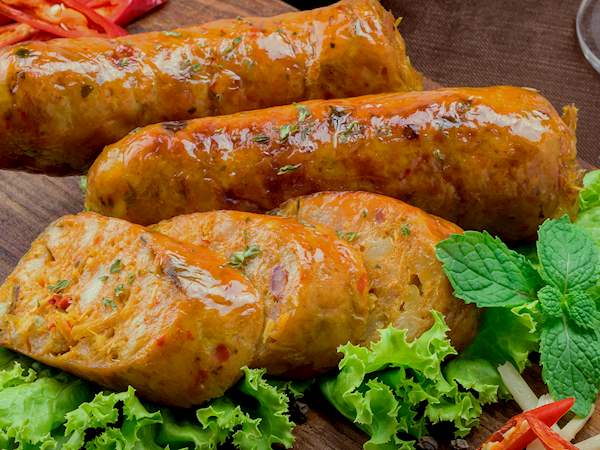 Mixed with some of the most widely used herbs and spices in Lao cuisine: shallots, lemongrass, chilies, kaffir lime leaves, and garlic, the sausage is made from ground pork shoulder in a traditional natural casing. Padaek, which is a special kind of fish sauce made in Laos, also contains several recipes.

The dish is a local delicacy, and at all hours of the day it can be found at most eateries and street stands. 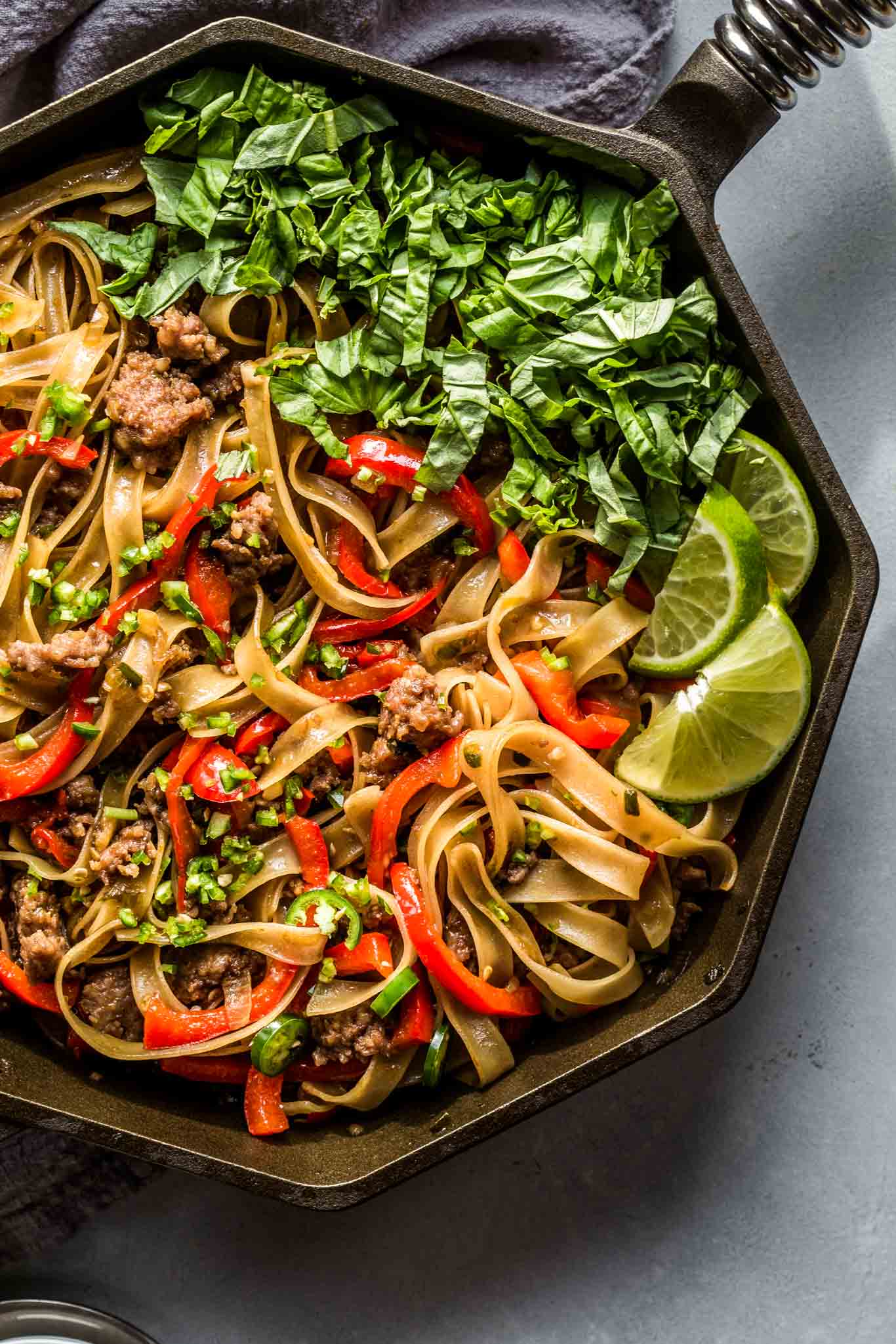 As the main ingredient, other variations of the dish use squid or distinct seafood. As to the origin of its name, there are many hypotheses, but the most widely accepted one is that pad kee mao is a popular late-night drinking food of choice. Nowadays, in Thai-fusion cuisine, the dish is also used, with some variations made with instant noodles or even spaghetti.

Koi is a raw meat dish that is prevalent in Lao culture and in the Isan region of northeastern Thailand. In a way similar to a salad, the most common iterations of koi are prepared. The basic recipe includes thinly sliced fish with chopped greens (yardlong beans, shallots, and galangal) (usually locally caught tilapia), mixed and seasoned with ground roasted rice, chili flakes, fish sauce, and lime juice. 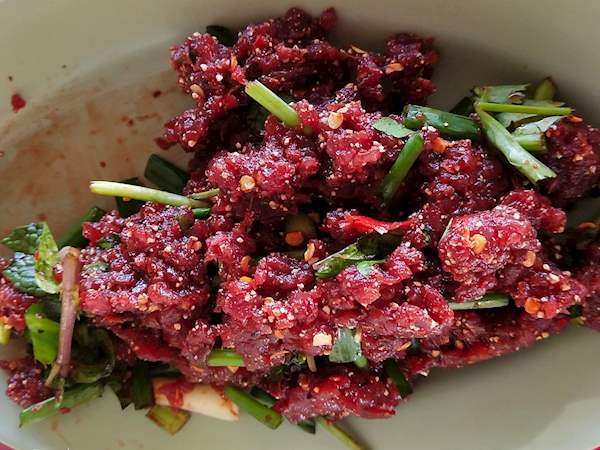 Although the original version of koi is made with raw fish, blanching the fish in boiling water in advance is also appropriate. This is because liver infections may be spread by certain raw fish and the blanching process leads to a much safer way to prepare the dish.

Koi pla, made with raw fish and living red ants, and koi hoi, made with raw snail meat, are some other variations of koi, particularly common in Thailand.