Most Popular Hot Dogs All Around The World

The delicious completo, which is the Chilean version of the popular American hot dog, is one of the most common street food products in Chile. The whole dish is finished with generous quantities of various savory condiments such as sauerkraut, mashed avocado, sliced tomatoes, mayonnaise, mustard, and several other luscious combinations, made with boiled wiener sausages served inside simple bread rolls. 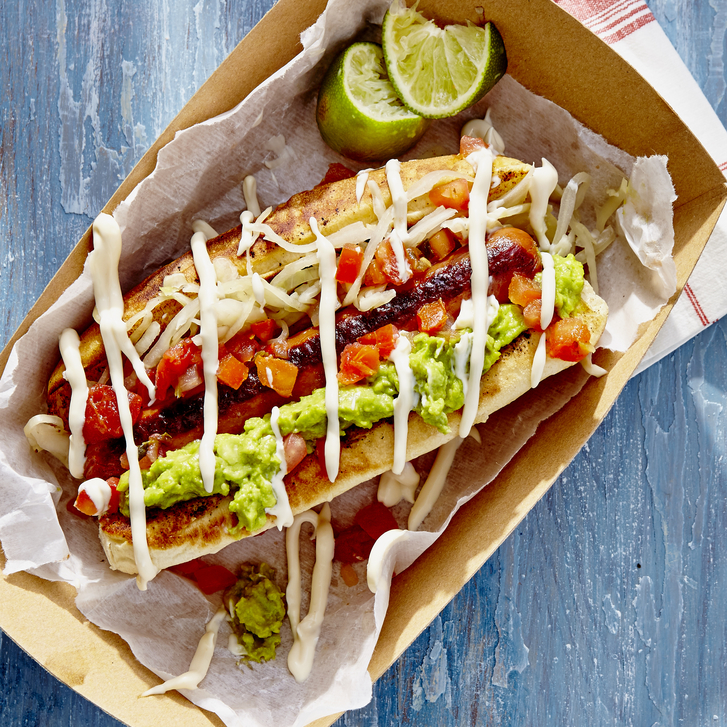 Depending on the toppings, they appear under various names such as original or Italiana, and can be found in the local laid-back eateries and fast food chains everywhere in the country.

Mixtas are Guatemalan variations of hot dogs, sold throughout the country from various food carts. The fact that the sausages are not wrapped in buns but in tortillas is what makes mixtas special. The dish is often made with fresh and inexpensive ingredients, so coleslaw, onions, diced tomatoes, guacamole, and green chiles are usually filled with lime-dressed mixtas.

The Maxwell Street Polish sandwich, one of the street foods associated with Chicago, is said to have been founded in 1943 by a Macedonian immigrant, Jimmy Stefanovic, who operated a hot dog stand in the old Maxwell Street market district of Chicago, now called Jim’s Original. 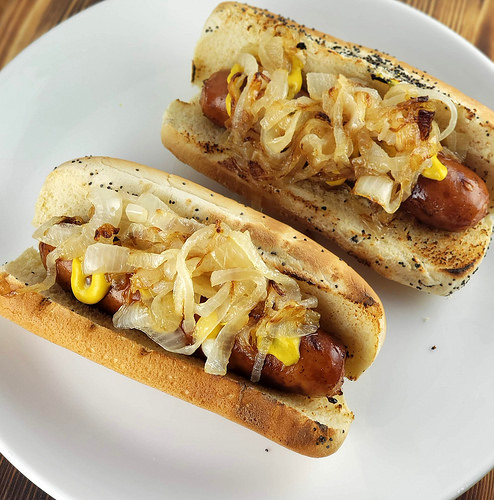 The grilled or fried Polish sausage served on a bun is topped with grilled onions, yellow mustard, and optional pickled green sports peppers. Maxwell Street Polish grew to be one of the most popular local fare in the Windy City soon after its invention, and remains until this day a staple of its hot dog stands.

Pancho is an Uruguayan hot dog made with a sausage in a pan de Viena bun. The sausage often sticks out from the bun as it is usually longer than pan de Viena. Experts say that the pancho is all about the toppings, which vary depending on the region and vendors.

Some of the favorite toppings include corn, mustard, cheese, onions, and salsa golf, which is a combination of mayonnaise and ketchup. If you’re making pancho at home, it is recommended to serve it with a side of french fries.

Sometimes referred to as rød pølser, this popular snack is the most common fast food eaten in Denmark. In fact, nothing more Danish is considered to be than eating freshly prepared pølser followed by a refreshing beer bottle.
It is a traditional Danish sausage that is served in a bun and is considered a sort of gourmet hot dog. Its peculiar red color distinguishes the initial pølser and is usually made with pure pork. About 1921, the first Pølser originated.

It quickly became popular, and has since become an important heritage and fast food tradition all over Denmark. It is sold on the streets at mobile food stands called pølsevogns, where many types of hot dogs are served, but pølser is the absolute crowd pleaser.

In Copenhagen, there are more than 120 pølsevogns and they are present throughout the year. Pølser is normally eaten on both sides with the sausage sticking out of the bun, and ketchup, mustard and Danish remoulade are the traditional condiments served with the sausage. Adding chopped onions, a heap of fried onions, and sliced pickles on top, crowns the traditional Danish pølser.

A sandwich consisting of a chorizo sausage and a variety of condiments in a crusty bun, Choripán is the ultimate in Argentine street food. It is commonly consumed on the go, as it is mainly sold in Latin America at street stands.

There are two words derived from the name choripán: chorizo, which refers to sausage, and pan, which means bread.

Cheese dogs are one of the numerous hot dog varieties found in the United States. The group includes cheese-infused varieties of the classic wiener hot dogs. The cheese can be incorporated in the sausage, spread on a bun, or additionally placed on top of the hot dog. Although soft buns are the most common casing for the warm wiener and cheese combination, baguette bread, toasts, or plain white bread might also appear in some local types. Among the numerous available varieties of cheese dogs, the most famous is a simple hot dog served with heaps of cheddar cheese which partially melts on the sizzling hot sausage. 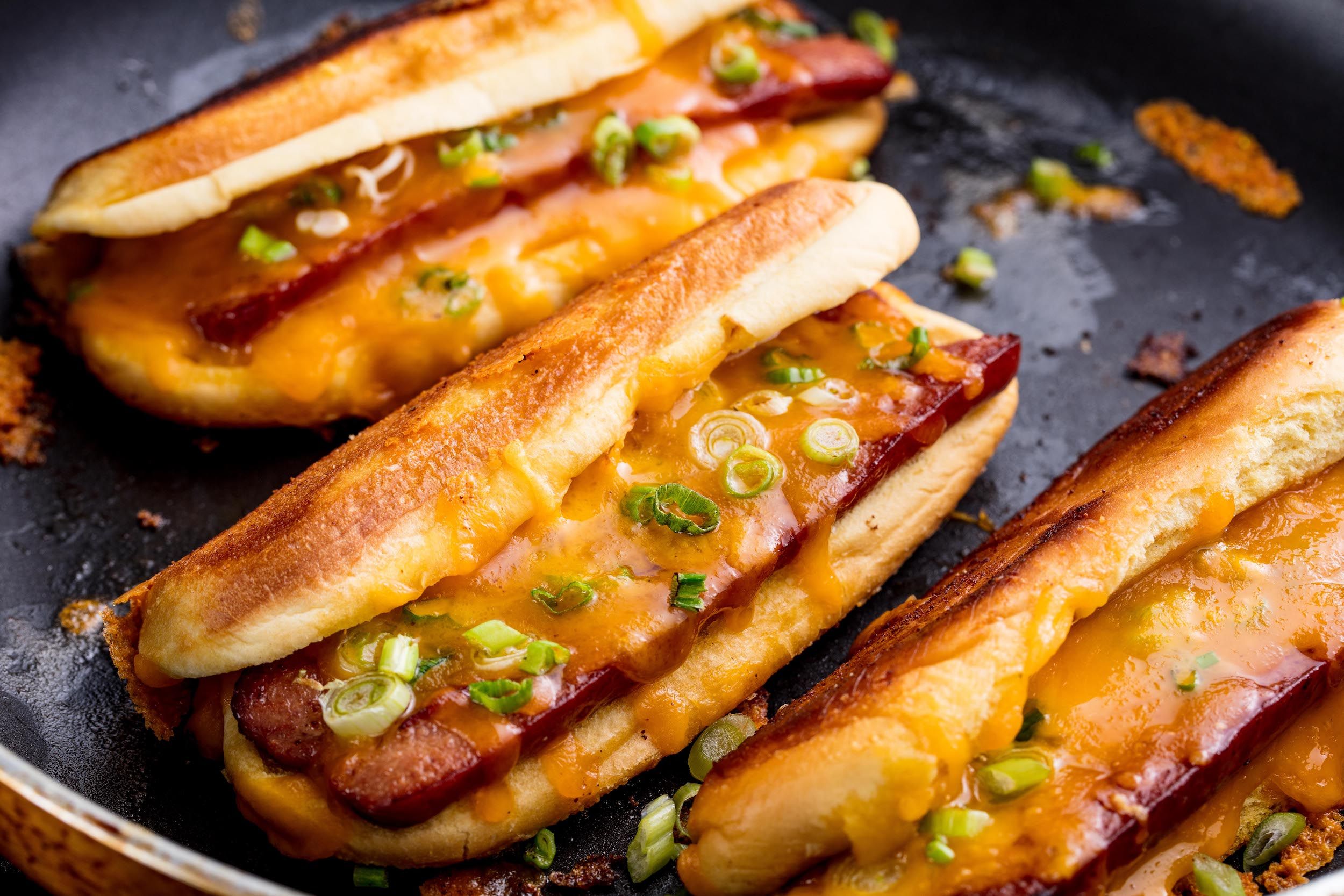 It is an all-time American favorite, eaten across the country. Cheddar cheese is occasionally replaced with Swiss cheese and other semi-hard cheese varieties. In Seattle, a very common type is a cream cheese dog, characterized by the soft cream cheese which is spread inside the bun. Chicago is proud of its Francheezies, a highly caloric creation in which the Wiener is covered in bacon and stuffed with cheese. Invented in Pennsylvania, Reuben, Texas Tommy, topped with corned beef and sauerkraut, and macaroni and cheese dogs, are just a few of the most popular varieties belonging to this large and versatile group. Cheese dogs, and other types of hot dogs, are also served as fast food. Typically, they are prepared by street vendors or served in laid-back eateries found throughout the country. They are most frequently associated with holidays, and at various sporting events they are an irreplaceable accompaniment.

Chili dog is an American production consisting of a traditional bun sausage, topped with chili sauce and other ingredients, such as onions or cheese, depending on personal tastes. At various street stalls, local eateries, and sports stadiums, the dish is also sold. No one can really agree about the origins or the inventor of the chili dog: some claim it was invented in Texas, the chili capital, while others believe that the first chili dog was created at Art’s Famous Chili Dog Stand in southern Los Angeles.

There are other hypotheses, of course, but some want to suggest that they must have invented a baseball game in New York. The main component of the dish, chili sauce, is also a subject of great debate: does it have beans or not, and is it the only topping permitted? Regardless of its origins, the chili dog remains a staple of street food that is basically American.

The history of Chicago-style hot dogs starts with street cart hot dog vendors who first began selling them during the Great Depression’s harsh times. As the vendors sold a flavorful, hot meal on a bun, the Chicago dog was born and began selling it for only a nickel. The Chicagoans chose no ketchup, and it is still deemed inappropriate, so much so that it is not even sold as a condiment by a significant number of hot dog vendors. A final proof of its popularity is evident in the fact that the Chicago area has more hot dog restaurants and stands than McDonald’s’, Burger Kings, and Wendy’s’ combined. Vienna beef hot dog was placed in a steamed poppyseed bun, then topped with numerous ingredients—green relish, yellow mustard, fresh, diced onions, red tomato slices, kosher pickles, a bit of pickled peppers, and a sprinkle of celery salt. The customers absolutely loved the unique combination of hot and cold, crisp and soft, sharp and smooth, and the hot dogs became an authentic icon of the city.

Perro caliente is a Colombian variety of the hot dog, characterized by its large size and unusual toppings. The sausage is steamed or boiled and usually topped with ingredients such as pineapple chunks, mayonnaise, ketchup, mustard, raspberries, bacon, and crushed potato chips. 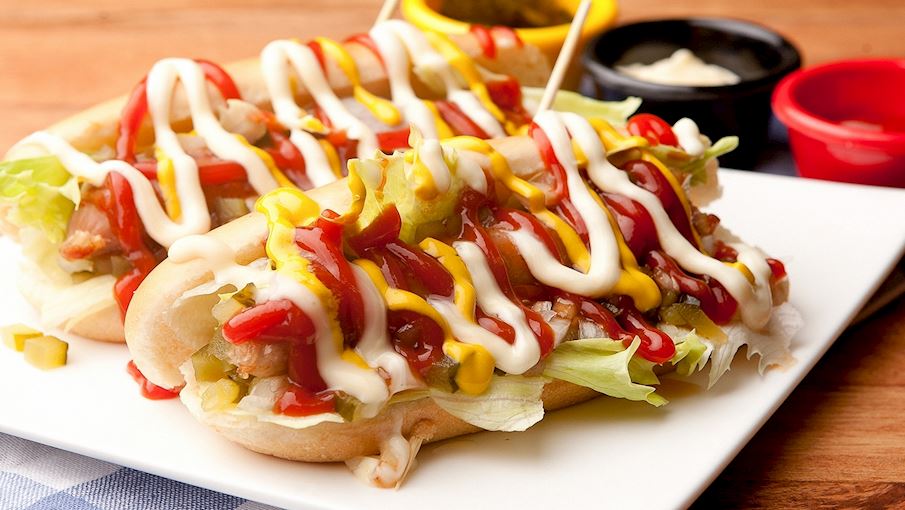 The entire thing is put in a bread roll that is then covered in paper or served in a boat made of styrofoam. This famous fast food has a variety of regional variations, so some cooks like to add on top a bit of lettuce or a quail’s egg. Perro caliente can be found in Colombia on numerous street stands, but it is also very common in the United States of America, especially in New York City’s Queens neighborhood.