Sorbetes is a popular Filipino ice cream flavored with ingredients like mango, chocolate, coconut, cheese, and purple yam (ube). It is traditionally generated from carabao milk and served on sugar cones in tiny scoops. Some Filipinos like to consume it, like a hamburger, sandwiched between bread buns. 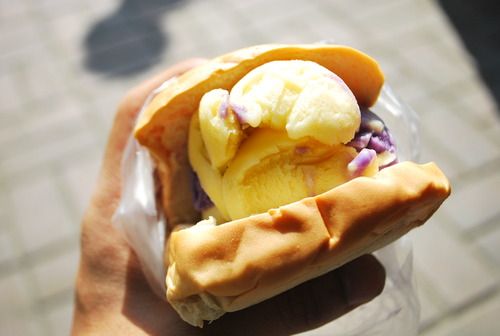 Although it sounds like a sorbet coming from a Spanish sorbet, it is not a sorbet, but a dirty ice cream, as it is jokingly called by the locals because it is sold along polluted streets. Sorbetes can generally be found throughout the Philippines in numerous street carts.

A Filipino dessert, Pichi-pichi consists of three main ingredients: grated cassava, sugar, and water. Until it develops a firm, glutinous texture, the concoction is steamed and then rolled into desiccated coconut. During receptions, parties, and celebrations, the dessert is particularly popular. 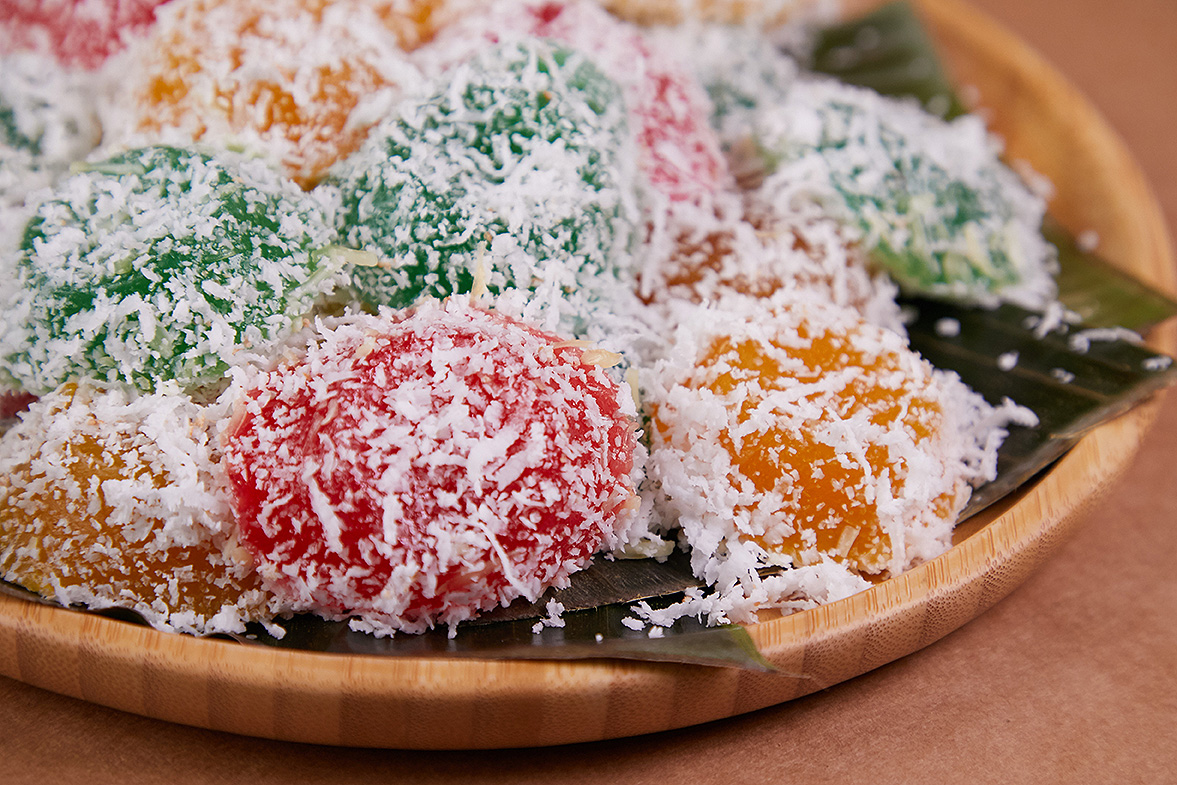 In Quezon Province, this delicate, sticky treat was originally invented.

Nata de coco is a unique Filipino specialty that is generally eaten as a dessert and made with fermented coconut water. It turns into a jelly-like substance with a soft, chewy, and gelatinous texture after days of fermentation. Plain nata de coco is pale white and almost translucent, has a neutral taste and is usually cut into big cubes.

It originally appeared in the Philippines, and during the 1990s it became incredibly popular in Japan. It is now found in a variety of different flavors and shapes, and although it can be eaten plain, it is usually incorporated into fruit salads, yogurts, ice cream, and drinks that are refreshing.

A nutritious Filipino chicken soup is Tinolang manok, or chicken tinola. It may consist of different chicken cuts and internal organs cooked alongside green papaya and chili pepper or malunggay leaves in a flavorful broth. Ginger, garlic, and fish sauce are usually generously seasoned with the broth and the soup is often served over plain white rice. 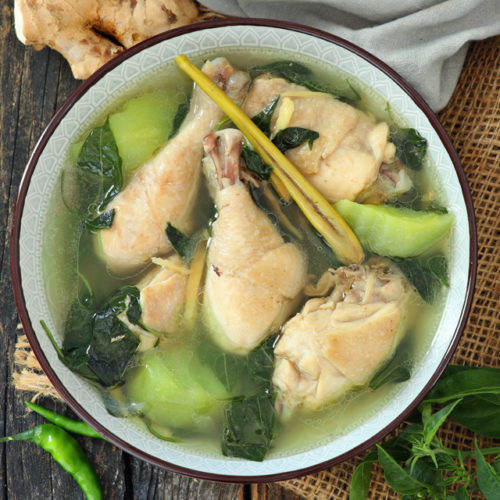 Chicken tinola is a staple in every Filipino household and can be enjoyed as a starter or a hearty main course.

Together with authentic Filipino dishes, Atchara is the famous Filipino green papaya pickle usually enjoyed as a condiment. A variety of other vegetables, such as carrots, onions, daikon radish and bell peppers or chili peppers, can be used in addition to long strips of unripe papaya. 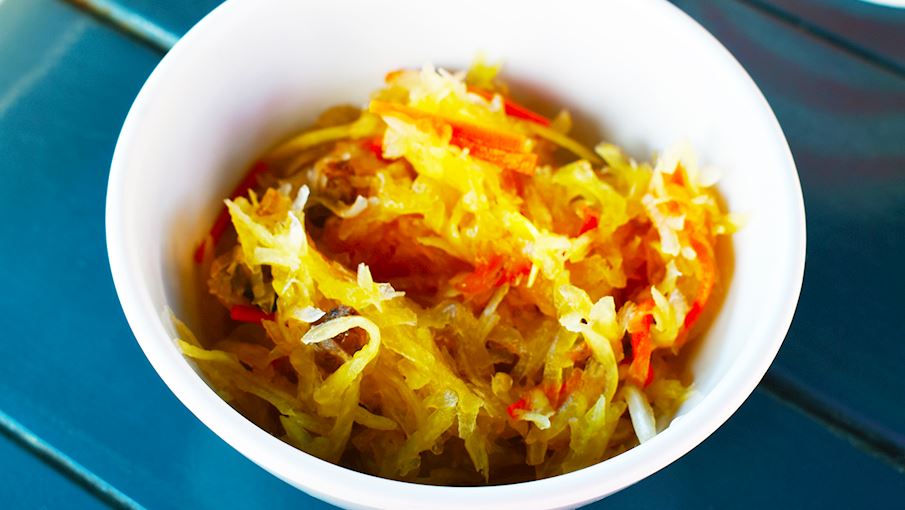 Pineapple chunks or sweet raisins can also be part of it. Occasionally, the vegetables are grated, but more commonly julienned, which gives an odd, crispy texture to the atchara. The heated marinade is poured over the vegetables, which mixes vinegar, sugar, ginger, garlic, salt, and peppercorns, and the relish is pickled until all the flavors develop.

The atchara is the perfect compliment to heavier Filipino dishes such as fried beef, sausages, or grilled chicken with its crispy texture and a refreshing blend of sweet, sour, and spicy flavors.

This comforting Filipino stew mixes a rich tomato sauce with diced marinated pork, onions, potatoes, and pork liver. It appears in various regional variations, which also use raisins, bell peppers, garbanzo beans, and red hot dog sausages, as it is one of the national Filipino dishes.

Menudo is typically prepared for every important event in the Philippines and comes with steamed rice served on the side.

Tapa most often denotes thinly sliced beef sirloin in Filipino cuisine, typically put in a sweet, salty, and tangy marinade made with soy sauce and calamansi lemonade, flavored with sugar and minced garlic. Mutton, venison, wild boar, horse, deer, and even carabao meat – a swamp-type domestic water buffalo native to the Philippines – are other meats used for making tapa. 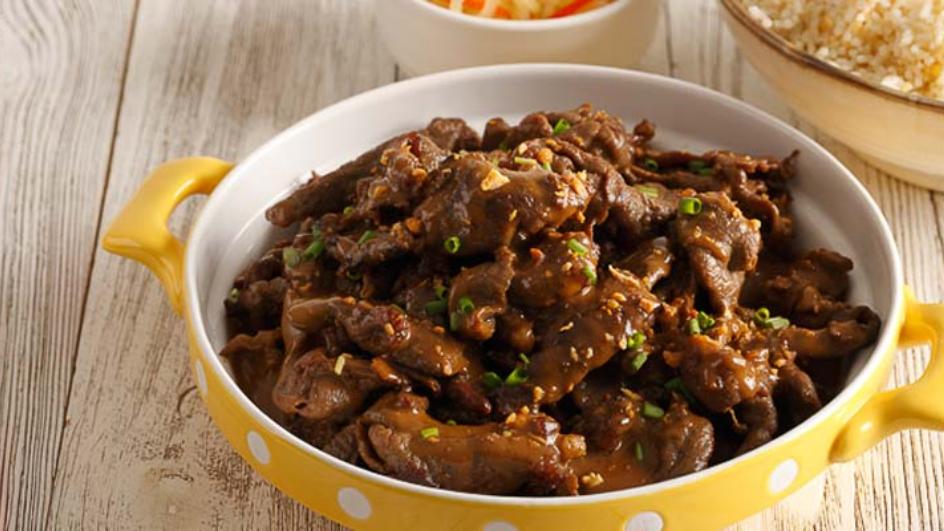 Tapa is normally either grilled or pan-fried, and when eaten as part of the so-called tapsilog, which is a portmanteau of the tapa and sinangag Filipino words, meaning garlic-fried rice, and itlog, meaning eggs, it is best enjoyed.

Tapsilog is also followed by sliced tomatoes called atchara, or pickled papaya strips. All in all, this delicious combination is popularly referred to as the Champions’ Philippine-style breakfast, and it is a favorite way to start the day for most Filipinos.

Tapsilog, a plate that consists of sliced beef jerky, known as tapa, a heap of garlic rice, and a fried egg, is one of the most popular breakfast staples in the Philippines. The dish is believed to have evolved out of necessity to meet the needs of many employees who were looking for a quick, inexpensive, and nutritious breakfast. Tapsilog was finally included in the menus of several Filipino fast food chains and specialized tapsihan restaurants. It now exists in various flavors, and it can be enjoyed at any time of day or as a satisfying late night snack, even though it is still a favorite Filipino breakfast.

Bulalô is a typical Filipino soup that is cooked until the fat and collagen dissolve into the broth by cooking beef shanks and marrow bones, resulting in a robust taste of the dish. The soup is a specialty of the region of Luzon, where it is typically eaten in cold weather, when it is generally served for dinner. 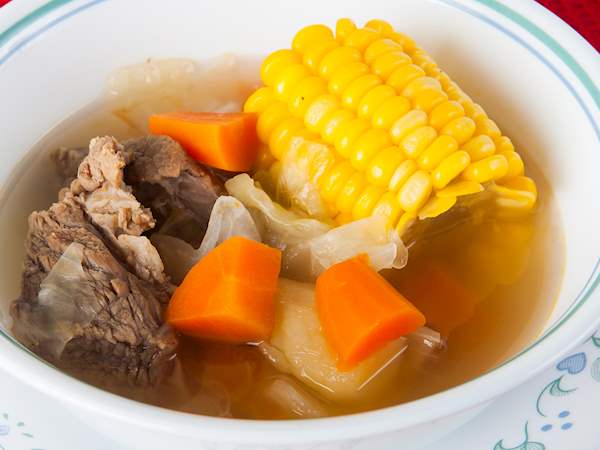 Vegetables such as cabbage, string beans, onions, and corn are part of most variations of the soup. It can be found in most upscale restaurants in the Philippines, since beef shank and bone marrow are not among the country’s cheapest meat cuts.

It is believed that when the meat is so tender that it falls off the bone, this simple, comforting, and flavorful soup is the best.

In the Philippines, while the term tocino originates from the Spanish, the word is synonymous with sweet-cured meat, traditionally made with pork, and sometimes beef or chicken. Various variations of spices and seasonings, usually including sugar, salt, rice wine vinegar, soy sauce, anise wine, and pineapple or orange juice, are doused with meat slices. 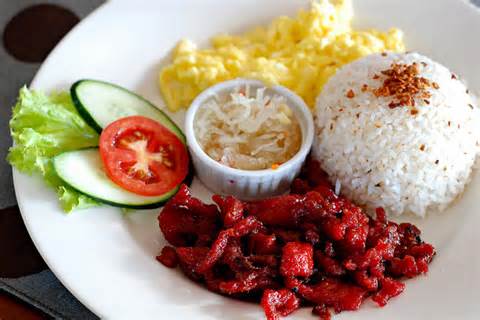 Saltpeter food preservative and annatto, a food dye derived from the seeds of the achiote tree that imparts color and peppery flavor, are common additions to the curing mixture. Most commonly, pork tocino, also known as burong babi, is only lightly pan-fried until it caramelizes and is usually sided with garlic fried rice and scrambled eggs or sunny side up.

This combination is called tosilog, and is a popular regular Filipino go-to meal, usually enjoyed for breakfast, but at any other time of the day it is also readily available.