Azifa is a popular salad made from green lentils, finely chopped tomatoes, and onions in Ethiopia. Furthermore, the salad is flavored with salt, pepper and lemon juice. It is often garnished with toasted almonds and chopped olives when eaten. 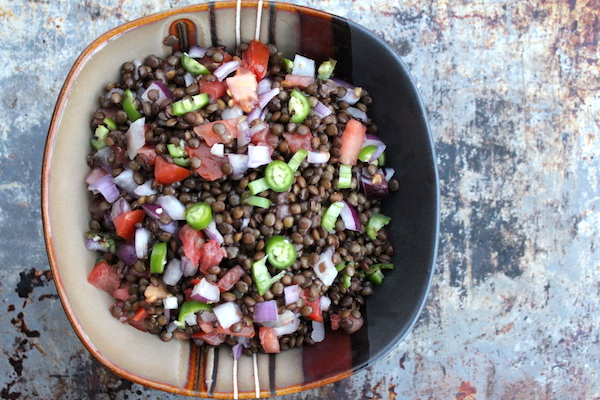 Traditionally, Azifa is served chilled, and is eaten as an accompaniment to various dishes of meat or fish. If refrigerated, it holds well and can also be used as a pita bread stuffing.

Doro wat is a festive form of chicken stew, usually purchased from outdoor markets. To eliminate bacteria, the meat gets soaked in water, salt, and lemon juice, and then cut into eight to twelve pieces. About five minutes before it is done, peeled hard-boiled eggs are added to the stew in order to absorb all the savory spices and the delicate red color. 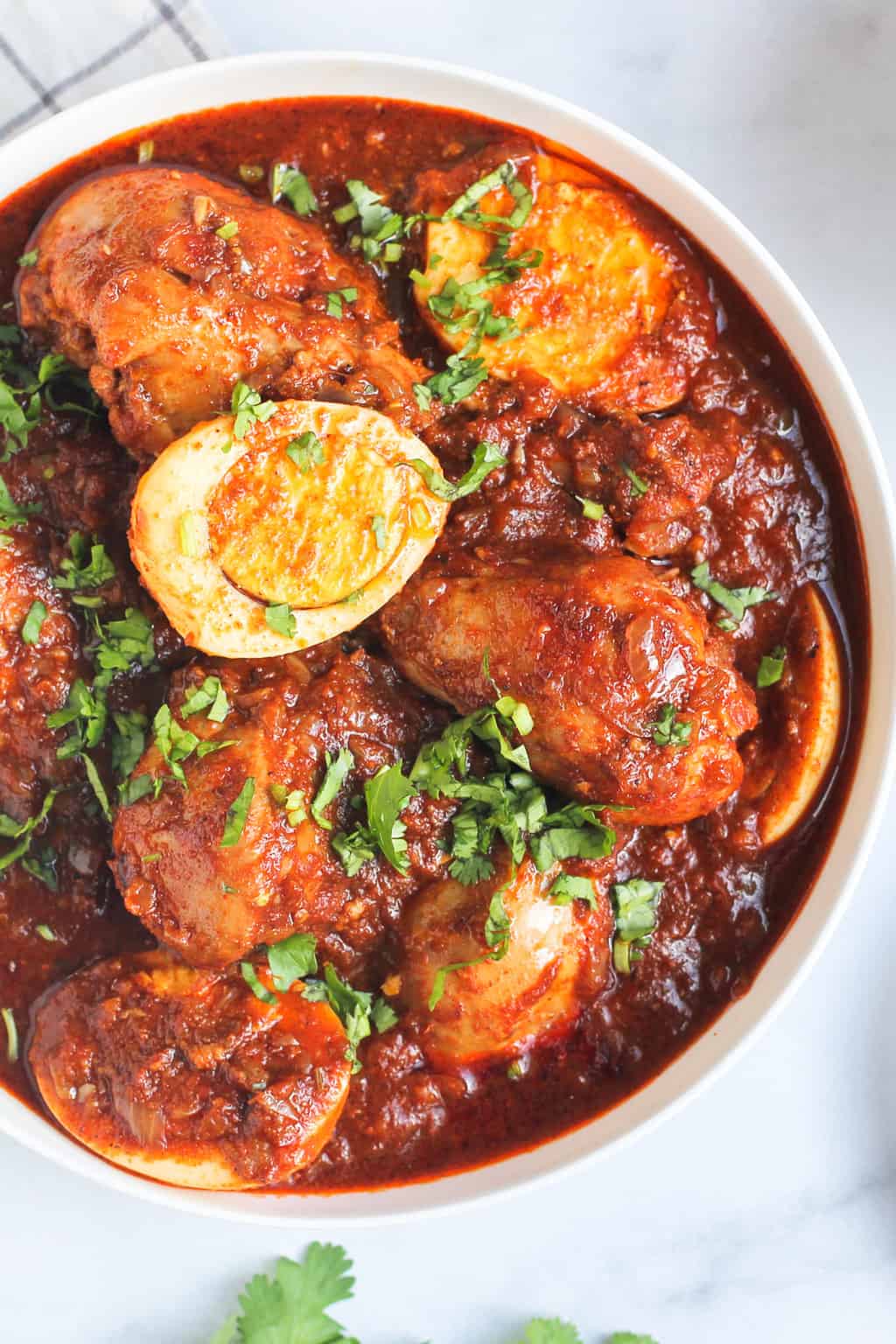 Doro wat is a must-have at each festival, including Christmas and Easter, with tender meat, spicy eggs, and a rich, flavorful sauce. Many Ethiopians have been fasting on meat for 43 days before Christmas, and most people choose doro wat as their preferred meat-based dish on Christmas.

Shiro is an Ethiopian stew made with garlic, onions, ginger, tomatoes, and chili peppers, along with chickpeas or broad beans as the main ingredients. The chickpeas give a nice texture and nutty flavor to this stew, but they can be replaced with shiro powder, which is a mixture of chickpea flour and different spices. 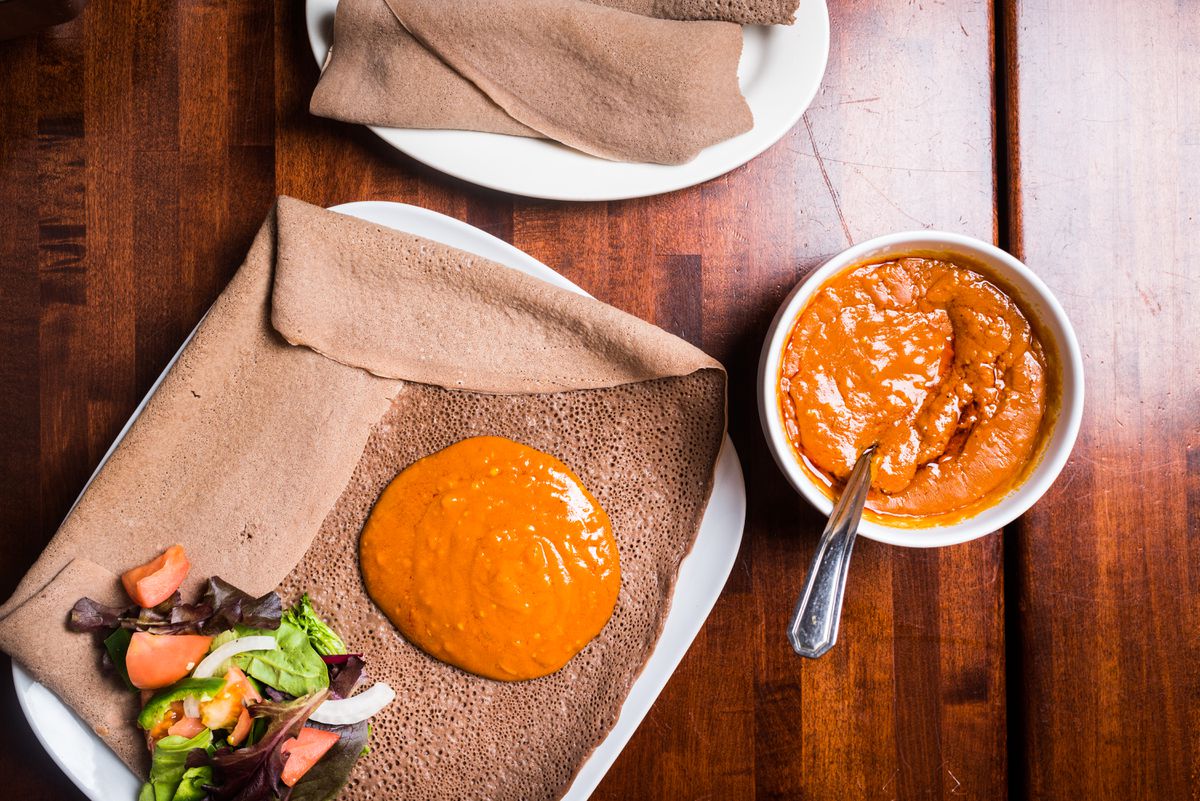 For special occasions like Ramadan and Tsom, the dish is traditionally prepared. Serving shiro with injera flatbread on the side is recommended.

Kitcha is an unleavened flatbread from Ethiopia made from wheat flour, water, and salt. Traditionally, the dough is baked on both sides in a pan until the exterior produces a golden-brown color. In addition, the flatbread can be spiced with chili and cardamom.

It is usually served hot with melted butter, or used in a dish called fit-fit.

Genfo is a widely consumed simple Ethiopian porridge for breakfast, made by adding dry-roasted barley flour to boiling water and stirring the concoction with a wooden utensil until a smooth, but extremely thick consistency forms. The porridge is then transferred to a bowl and a hole, usually using a finjalal, is formed in the middle (Ethiopian coffee cup). The well is filled with Berber spices and clarified spiced butter. Genfo is usually eaten as it is, although a scoop of yogurt may accompany it.

By pulling the thick porridge pieces from the outside and dipping them into the spice blend in the middle, the dish is often shared and eaten.

For the locals, Injera is a spongy Ethiopian flatbread and an important part of life. Because of its strong nutritious properties, the bread is made of teff, the world’s smallest grain, sometimes called a super grain. Injera is so common that by asking “Did you eat injera today?” people salute each other, and if the response is positive, it tells the other person that all is good. 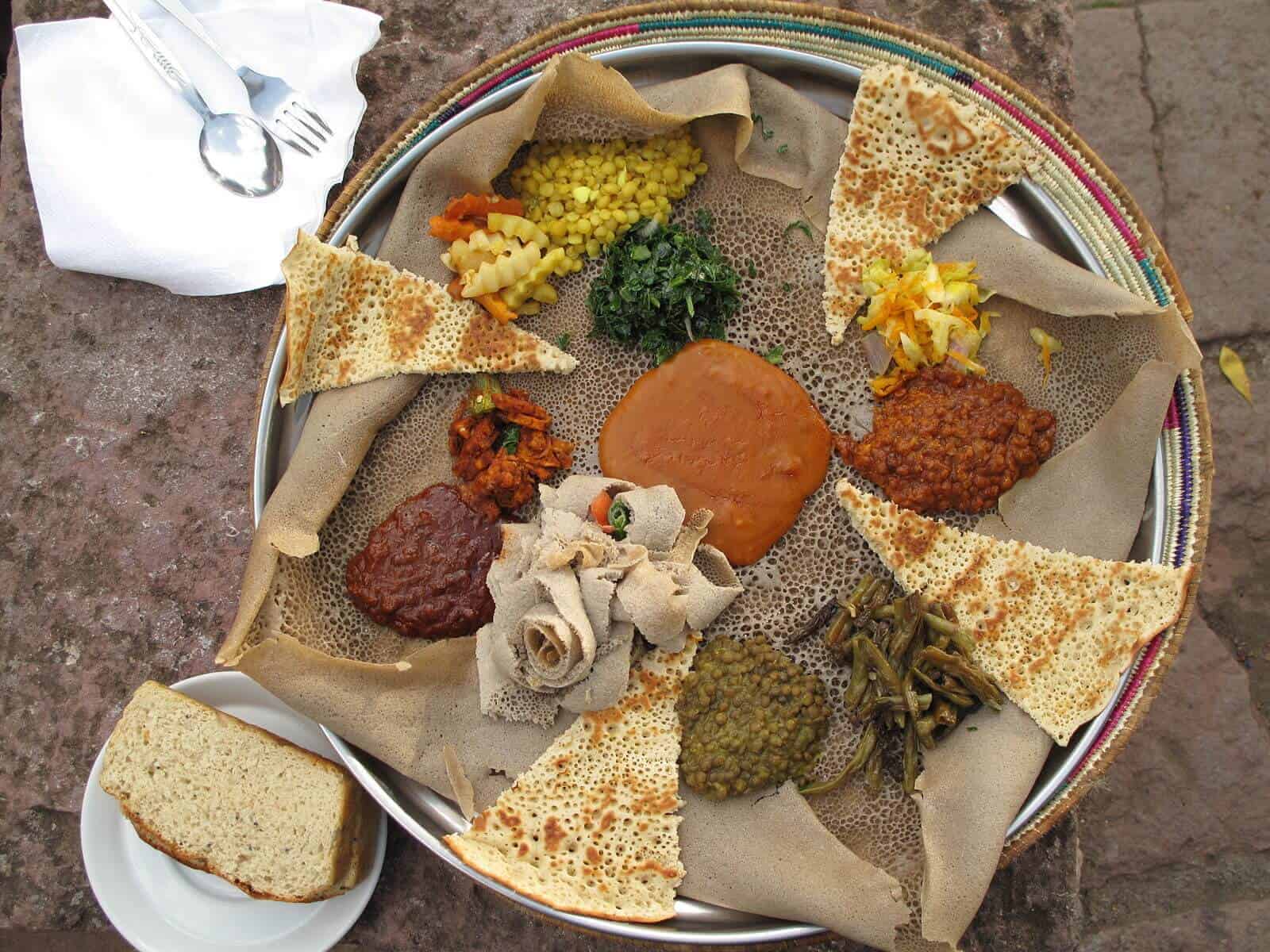 This flatbread is eaten for breakfast, lunch, and dinner and has kept many Ethiopians alive by sharing it when times are tough. Tart and somewhat similar to sourdough bread, its flavor is tart. The dough is left to ferment for three days and is then molded into a tall, pancake-like disk.

It is normally fried over a fire in a skillet, where the bread’s spongy texture grows when the dough reaches the hot skillet and on the inside it forms air bubbles. It is paired with the main course until cooled, usually a hearty stew. Injera is eaten without utensils; instead, it is cut into pieces and used from the shared communal platter to scoop up some more stew.

Wat is Ethiopia’s national dish, a spicy stew made with berbere, a mixture of spices usually consisting of very hot chili peppers, garlic, ginger, rue, basil, ajwain, nigella, and fenugreek, all of which are sold in the Ethiopian markets and ground with a pestle in a mortar. 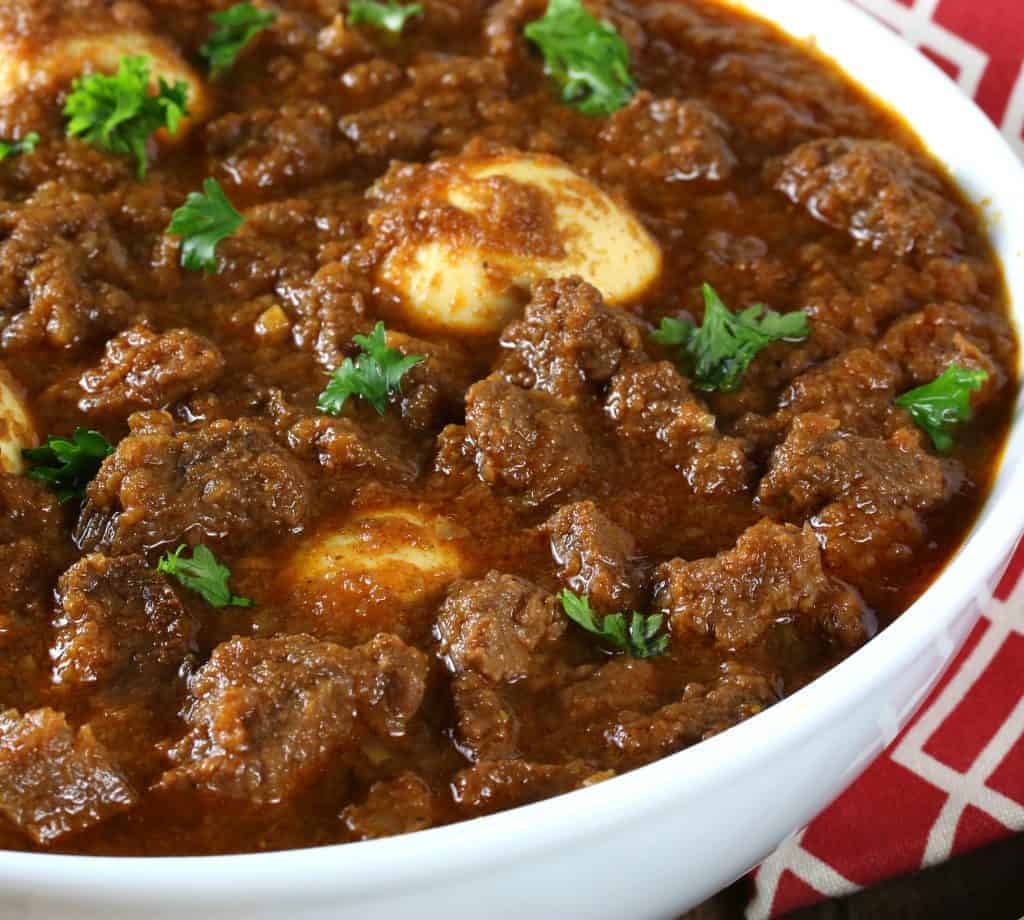 It can be made with beef, chicken, lamb, lentils, vegetables, or fish and is the most popular dish in the country. For religious reasons, pork is never used. Nothing is wasted in Ethiopia, so every possible cut of meat, fresh or dried, from fine cuts to organs, is used in the wats.

In the past, on the basis of their wat cooking abilities, Ethiopian women were judged, and those who made the best ones were most respected by their neighbors and husbands. Wat begins with onions, used to sweeten and thicken the stew, followed to perfection by berber, water, tomato sauce, and meat or vegetables, cooked slowly.

Kitfo is a popular Ethiopian dish that consists of freshly ground raw beef and is combined with Ethiopian butter (niter kibbeh) and spices such as chili and salt. With a range of breads, the dish is served, with injera being a staple of every restaurant that serves kitfo. 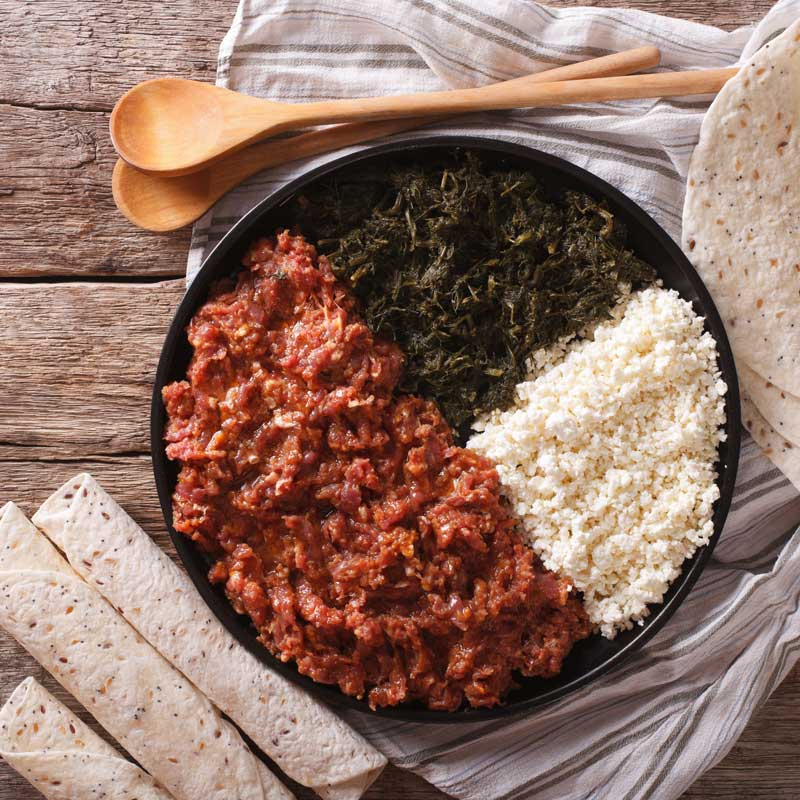 Although Kitfo is usually served on its own, salty cheeses or collard greens can also be added to it.

Tibs is an Ethiopian dish consisting of meat and vegetables that are stir-fried. In a wide range of ways, the dish can be served, ranging from mild to hot and containing a small amount of vegetables, lots of vegetables, or no vegetables at all. 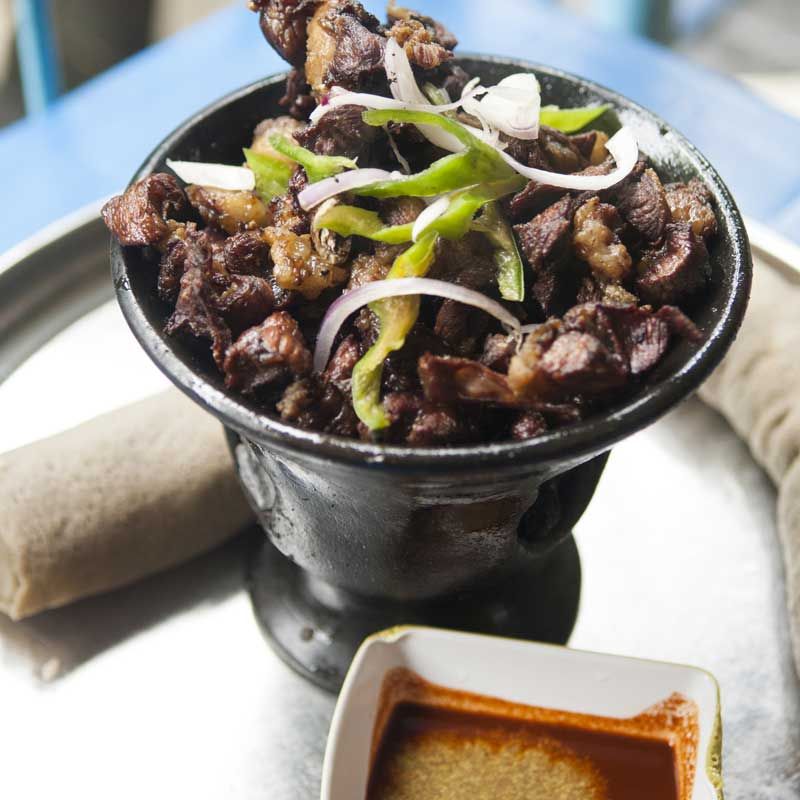 There are numerous variants of this Ethiopian delicacy due to the use of different types of meat. Tibs are usually prepared at special events and holidays as a sign of respect for someone, or as a festive dish.

Fitfit is a traditional Ethiopian breakfast dish made with clarified spiced butter and Berber spices. Two main versions of fitfit are available: one made of injera flatbread and the other made of unleavened kitcha bread.

Injera fitfit is combined with onions, while a scoop of yogurt usually accompanies kitcha.