These traditional, small-sized Indonesian pancakes are usually prepared with rice flour and a choice of coconut milk or shredded coconut. They come in sweet and savory variants, and can be adapted with wheat flour and different toppings such as sugar, bananas, crushed peanuts, jackfruit, chocolate sprinkles, or fermented oncom, although beef, sausages, or ice cream are also modern-day additions. The pancakes are extremely versatile. 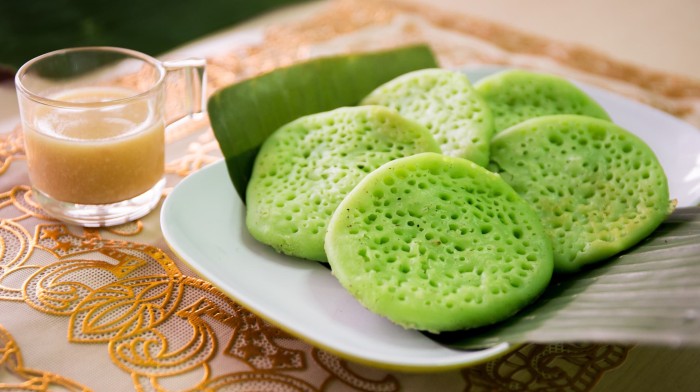 Throughout Java, Serabi pancakes are found, but they are typically associated with Bandung and Solo cities. Usually, they are accompanied by kinca syrup based on strawberry, durian, or coconut, and are mainly sold as a fast and convenient street food.

In Thailand, where it goes under the name khanom khrok, a similar dish can be found.

A traditional South Indian dish known as masala dosa, made from a batter of soaked rice and lentils that is baked into a thin pancake and usually stuffed with potatoes, onions, and mustard seeds, is popular throughout the country. Sometimes, the dish is garnished with grated coconut and chopped cilantro. 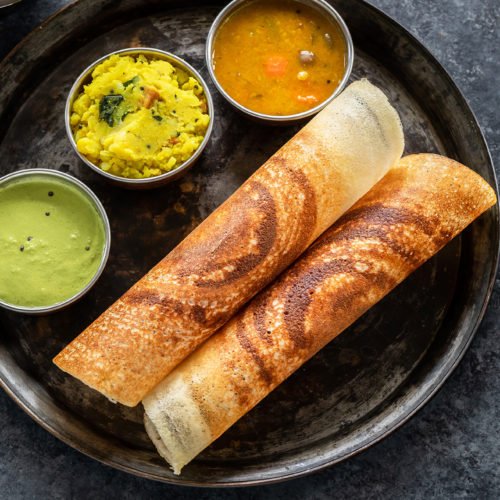 With its huge popularity, there are also some variants of the dish, such as mysore masala dosa, rava masala dosa, onion masala dosa, and paper masala dosa. It is usually eaten as a short snack or as part of some of the day’s meals.

Masala dosa has even made the list of 10 foods to try before you die, complied by the Huffington Post, alongside famous dishes such as Beijing duck, moussaka, and BBQ ribs.

Appam is a popular bowl-shaped Indian pancake made from a batter of coconut milk and rice flour. In Tamil Nadu, Sri Lanka, and Kerala, appam is most commonly eaten for breakfast or dinner, where it is culturally connected to the Syrian Christians called the Nasranis, who bake appam on a stone.

The pancake first appeared on the southern tip of India, according to an American food writer and historian, Gil Marks. Although not much of the history of appam is known, some even speculate that it originated in India from Jewish communities. 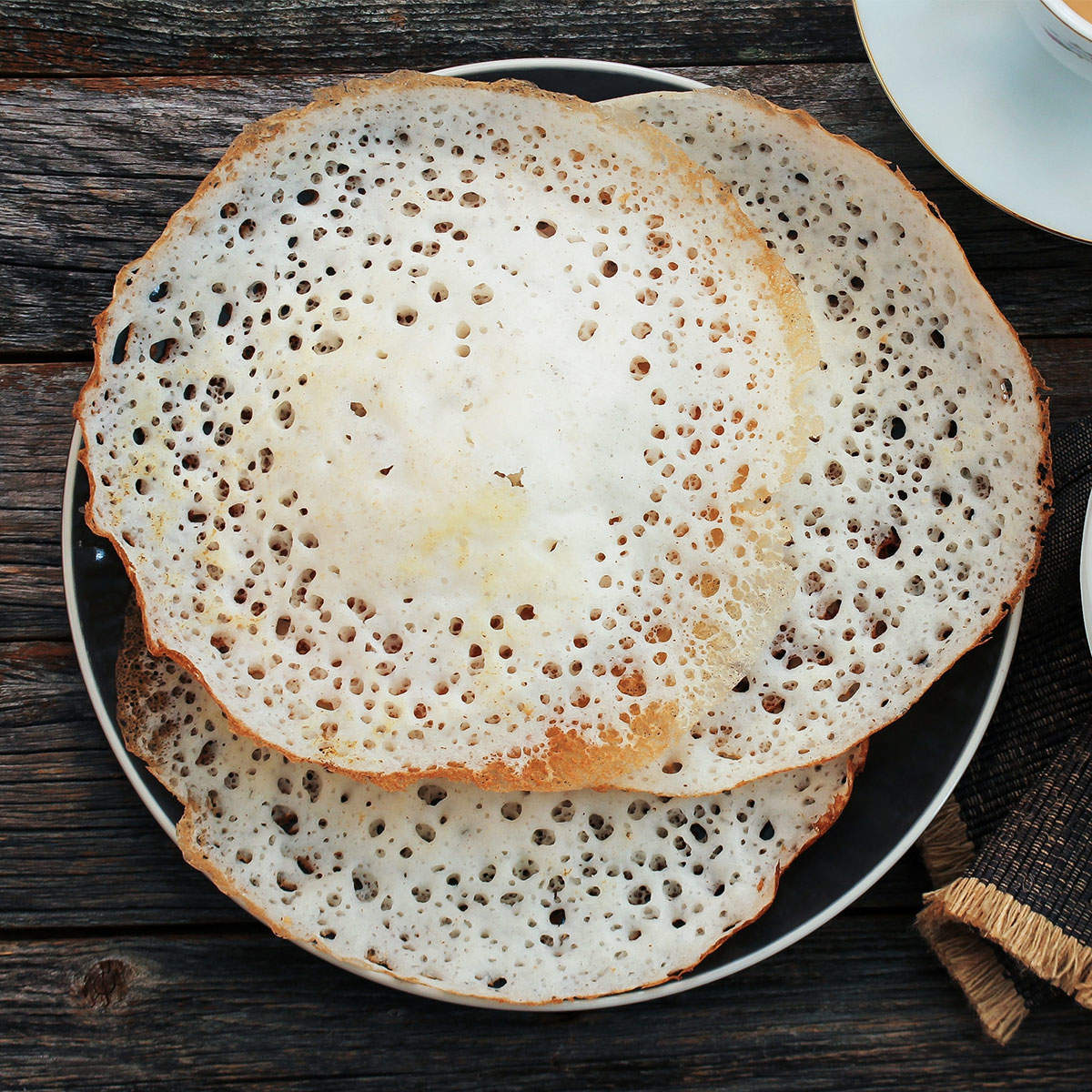 Today, spicy condiments such as coconut milk curry are traditionally eaten with it. A selection of ingredients such as steamed eggs, chutneys, fish, meat, and vegetables will fill the pancakes. Appam is a popular street food item, consumed mostly as a snack.

It is sold by street vendors known as hopper men throughout Sri Lanka and India, who typically serve it in lots of three to eight hoppers per person. There are also a variety of variants of appam, such as palappam, honey hoppers, and achappam, with its growing popularity.

On special festive occasions, the sweet varieties are typically prepared.

Pan-fried batter is a type of pancake consisting of wheat flour (komugiko) and fish broth, a specialty of the Japanese Kantō area known as monjayaki (dashi). Cabbage, seasonings, and other ingredients are combined with the pancake, fried until it is crispy on the bottom and slightly cooked on the top. 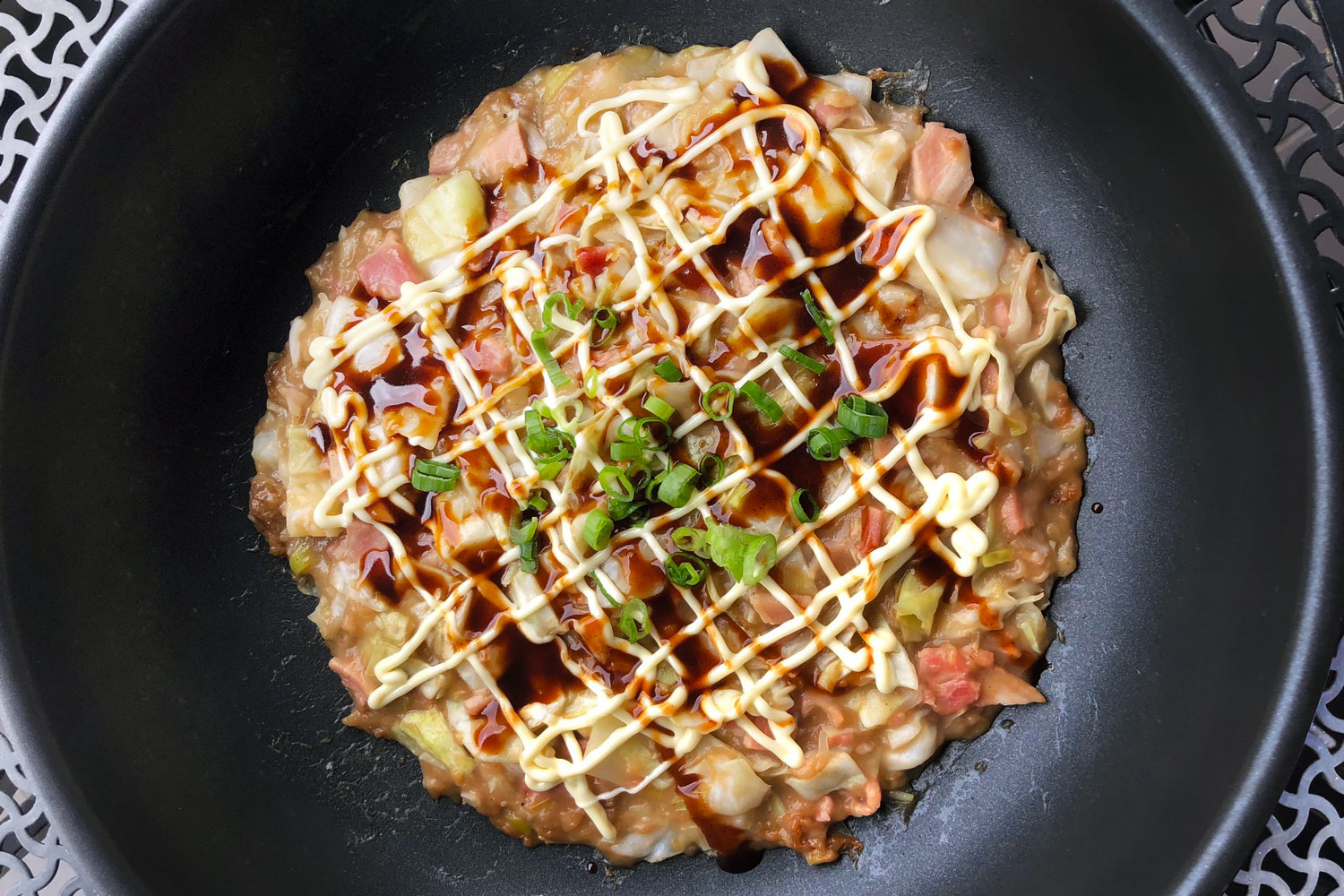 After World War II, when food was scarce, the dish first became popular, and the combination of dashi and komugiko provided an affordable way for numerous families to eat. Monjayaki is originally derived from funoyaki, a batter-only snack commonly served during Buddhist ceremonies.

Although it might be visually unappealing to some people, monjayaki is nowadays considered a delicacy, best consumed when still piping hot.

Bánh xèo is a popular Vietnamese dish, loosely translated as sizzling pancakes, that combines crunchy crêpes with a variety of savory ingredients. Rice flour, which is mixed with water, turmeric, and coconut milk or coconut cream in order to make the thick yellow batter, is the distinctive Vietnamese ingredient in these nourishing pancakes. 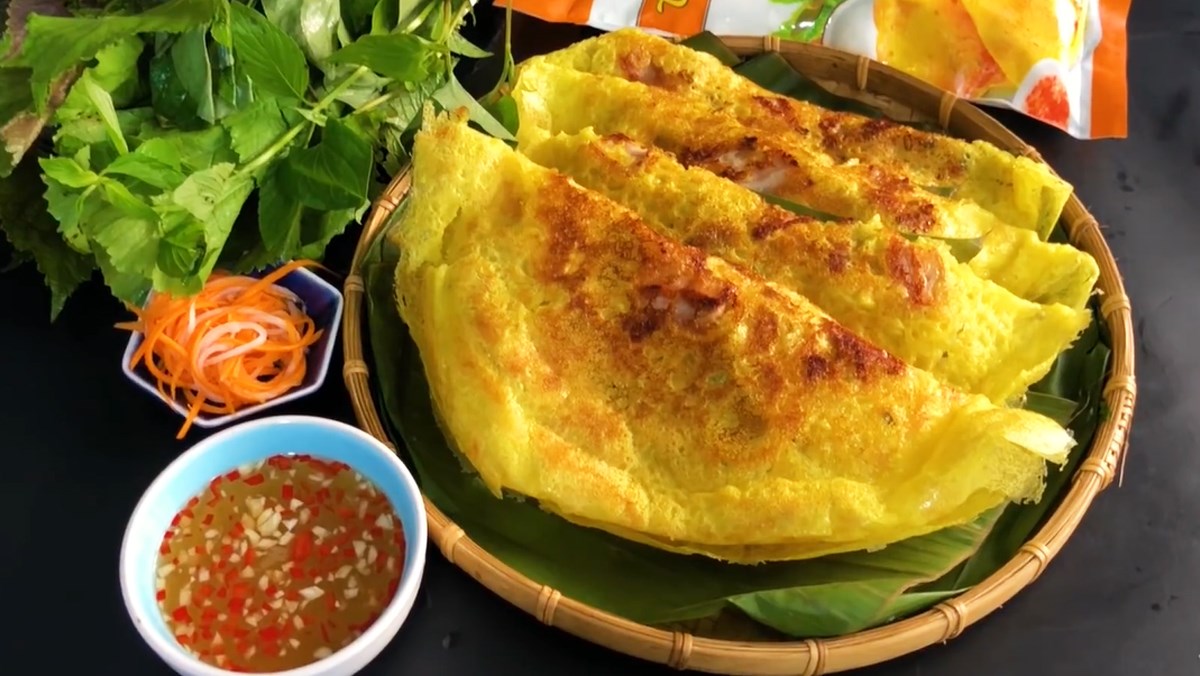 Additional ingredients are sautéed until the mixture is added to the pan, most commonly scallions, bean sprouts, shrimps, and cubed pork or beef. At a low temperature, the pancake is pan-fried and gently folded in half, keeping the ingredients securely tucked inside the pancake.

In Vietnam, Bánh xèo is eaten everywhere, with minor regional ingredient variations. It is typically served in a special way, generally supplemented with vegetables such as broccoli, carrots, and cucumbers, and heavily seasoned with fresh cilantro, mint, and parsley.

Famous nuoc cham sauce, made with fish sauce, lime juice, sugar, chopped chili peppers, and garlic is typically served alongside bánh xèo. The pancakes are always freshly prepared and are supposed to be torn in larger pieces, which are usually wrapped in lettuce or rice paper and eaten by hand.

Martabak is a roti-like stuffed and fried pancake that is often served in countries such as Saudi Arabia, Yemen, Indonesia, and Malaysia as a common street food item. Although the fillings can vary, ground meat, eggs, garlic, onions, peppers, curry, and ghee are some of the more common ones. 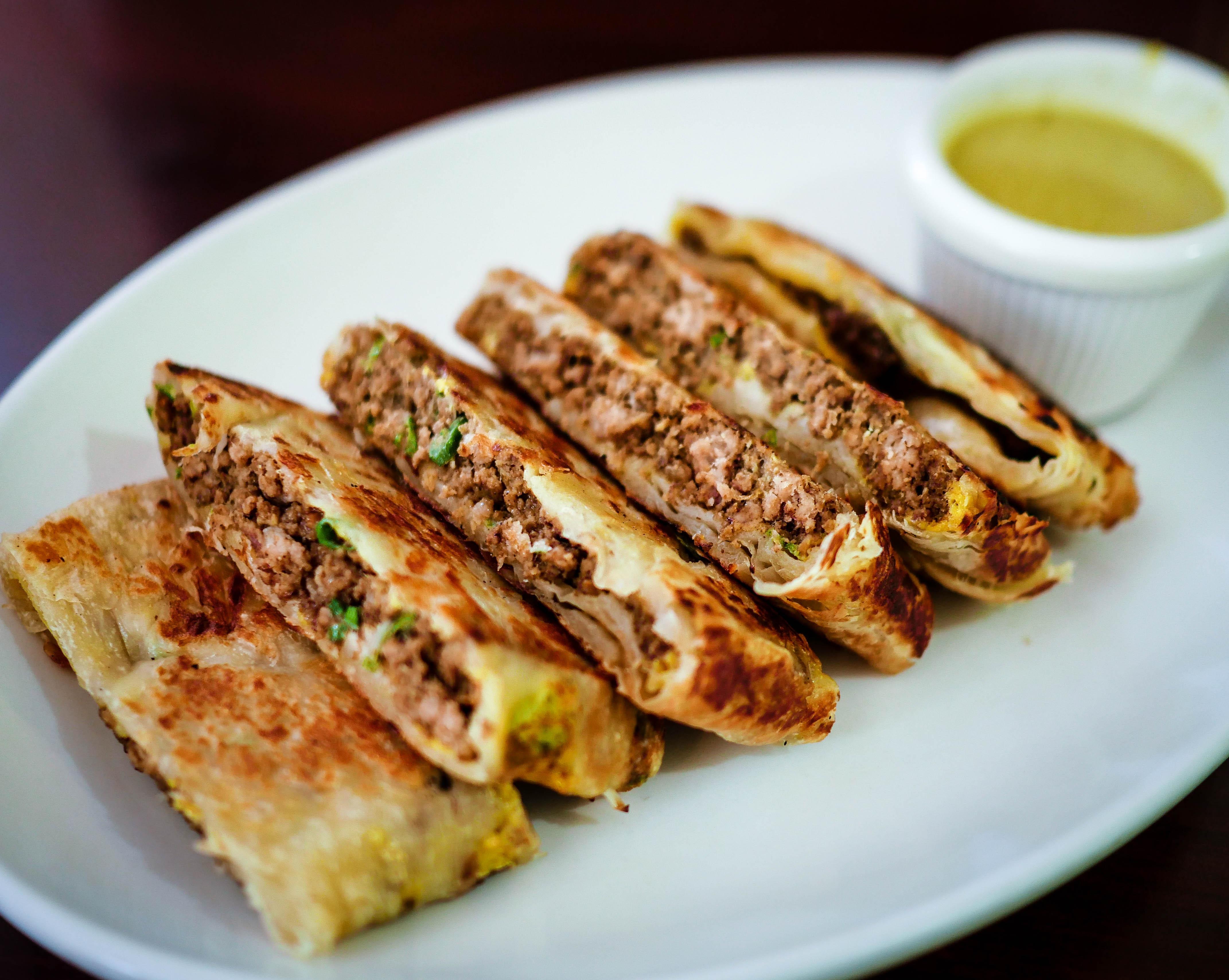 For additional flavoring, fresh herbs like coriander and mint are also used. The flatbread dough is meant to be extremely thin and requires a great deal of experience. Mutabbaq, an Arabic word meaning folded, is another term for the dish, referring to the way the stretchy dough is folded around the filling during cooking.

Typically, the finished result is formed like a rectangle, right after a golden brown color forms on both sides. Martabak is believed to have been invented at about the same time in Yemen and Saudi Arabia, and as both countries have a large Indian population, it soon spread to other regions of the Arab world, India and Persia.

Today, when martabak is not served fresh from street stalls, it can be found in its finished form in various stores, while sweet varieties called martabak manis – filled with chocolate, peanuts, and sugar – are particularly common.

Okonomiyaki is an incredibly popular Japanese dish, similar to an omelet or a pancake. Eggs, rice, water, grated yam, and shredded cabbage are used to make the batter. The mix is also sometimes added with additional ingredients such as fish, seafood, meat, vegetables or cheese.

Similar to a pancake, the batter is then pan-fried, and eventually garnished with condiments such as Japanese mayonnaise, pickled ginger, fish or seaweed flakes, and topped with a thick Worcestershire sauce-like sauce. The dish is eaten everywhere in Japan, but the Kansai region is generally synonymous with it.

Although there are many disputes about whether in Osaka or Tokyo okonomiyaki was created, there is no doubt that this unique dish was popularized by Osaka and made it an irreplaceable part of Japanese cuisine. Okonomiyaki’s style and ingredients also rely on the location, with the Osaka and Hiroshima-style okonomiyaki being the two most prominent varieties.

The type of Osaka, also known as Kansai, is regarded as the traditional and more common variety, where the condiments are typically mixed and put on top of the pancake. The variety of Hiroshima also involves yakisoba noodles, larger quantities of cabbage, and usually the garnishes are stacked on top of the pancake.

Jianbing or fried pancake is a thin and savory crêpe-like pancake made by spreading batter over a hot, cast-iron slab with a wooden paddle, a favorite breakfast item in China sold by numerous street food vendors early in the morning. 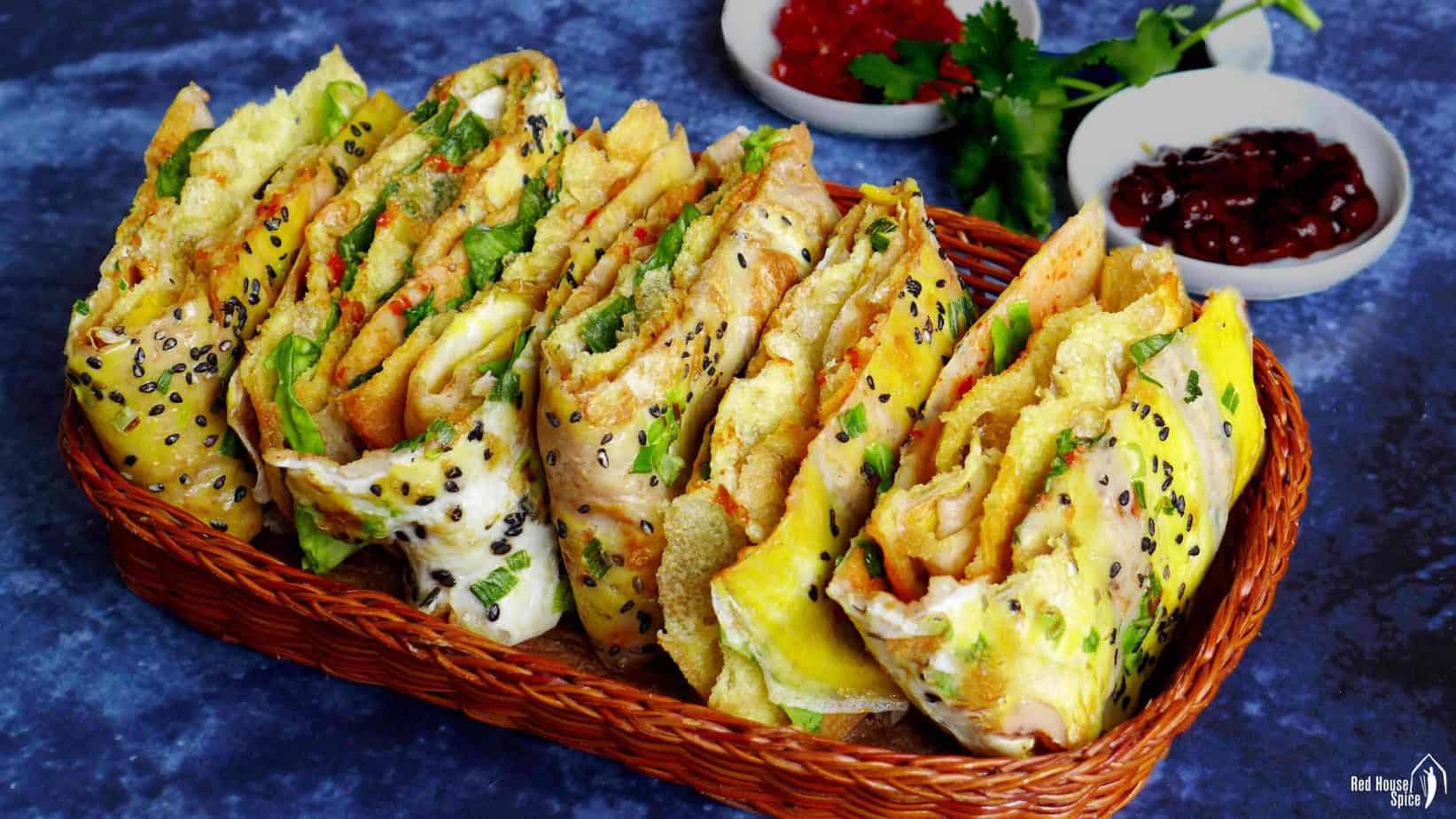 A variety of different flours can be used to make the batter, with mung bean flour, black bean flour, and wheat flour being the most common types. This fried pancake is usually topped with eggs, always freshly prepared and warm, then flavored with different sauces such as chili sauce, hoisin sauce, or tianmianjiang (savory bean paste) sauce, and filled with ingredients such as spring onions, mustard pickles, radishes, scallions, cilantro, or even protein such as chicken or Chinese sausage.

For extra crunchiness, a type of crispy-fried dough sticks called guozi or strips of crispy wonton are traditionally added to the pancake filling. The variations on this dish are endless as are the ingredients that can be added inside the crêpe wrapper. Versions of this Chinese dish can also be found in some of the world’s largest cities, including New York, Sydney, and London, typical of Tianjin.

One of the most popular Indian dishes is the thin pancake known as the dosa. It is made from soaked rice and black gram beans, ground into a paste and mixed to make a thick batter, usually left for overnight fermentation. A handful of fenugreek seeds enrich the mixture, giving the dosa its distinctive golden brown color and a delicious, crispy texture. 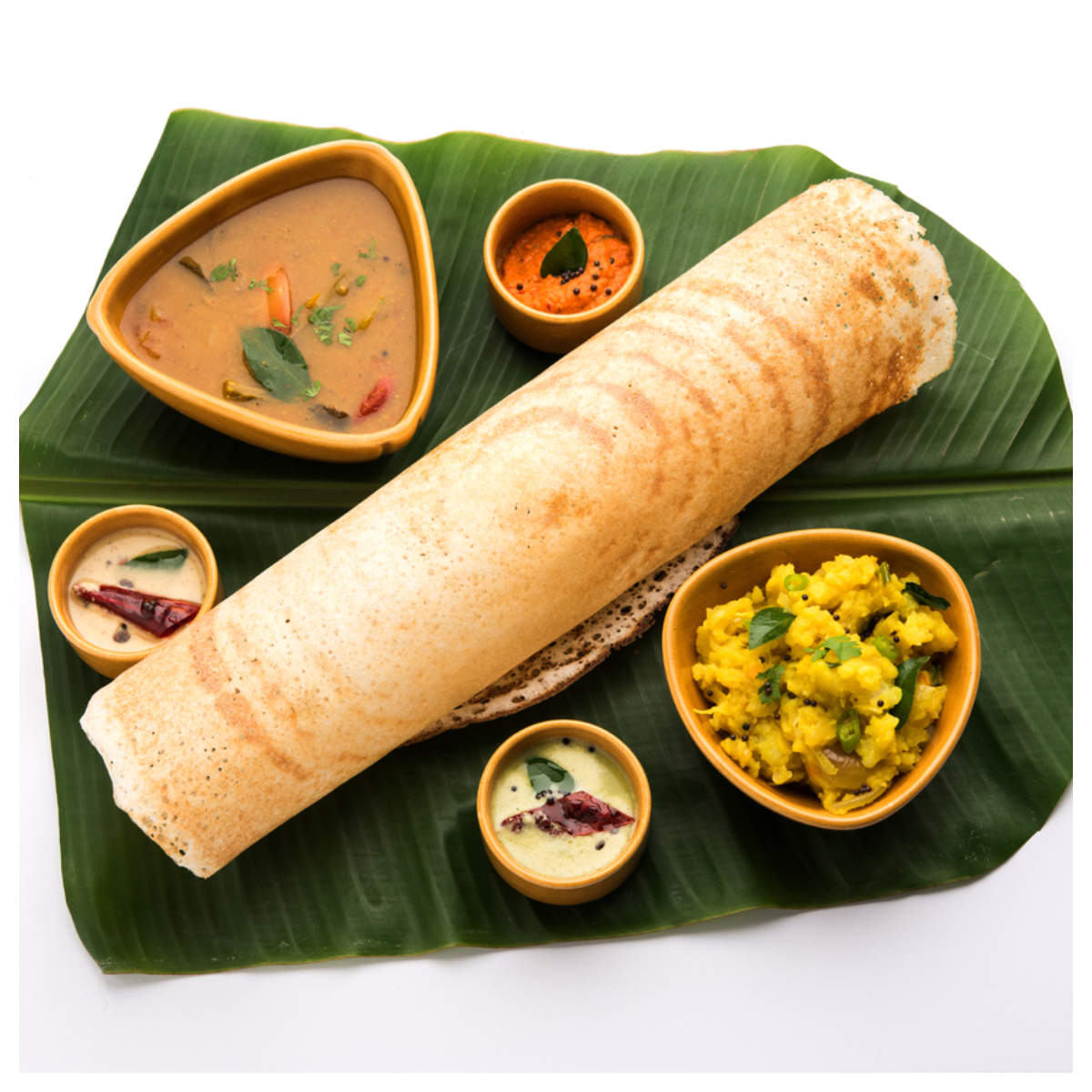 It is then baked, with a delicate, thin texture and a round shape, on a hot oiled griddle. In the whole world, Indian dosa is a staple dish, but some claim that dosa originated in the Tamil Nadu state of South India. It is an ancient dish, the roots of which go back to the 1st century AD, when Tamil literature first mentioned it.

It is often filled and covered with ingredients, or served on the side as an integral part of a meal, while the fragrant side dishes are typically used as a utensil to scoop. Dosa has been modified and mixed with other ingredients to produce various distinct variants, like other ancient food staples.

In some countries, wheat flour, semolina, rice flour, or soy milk are used to make milder, more diverse, and more interesting dosa varieties. In its many forms, this ancient Indian creation is found everywhere in India – it is sold by street vendors as a fast snack, and it is an irreplaceable item in traditional Indian restaurants.

In Korean cuisine, Jeon, also known as Korean pancakes, describes a variety of pancake-like dishes that are mostly served as appetizers, side dishes, or eaten as snacks. While jeon is usually prepared in savory variants, these flavorful pancakes also have some sweet varieties. 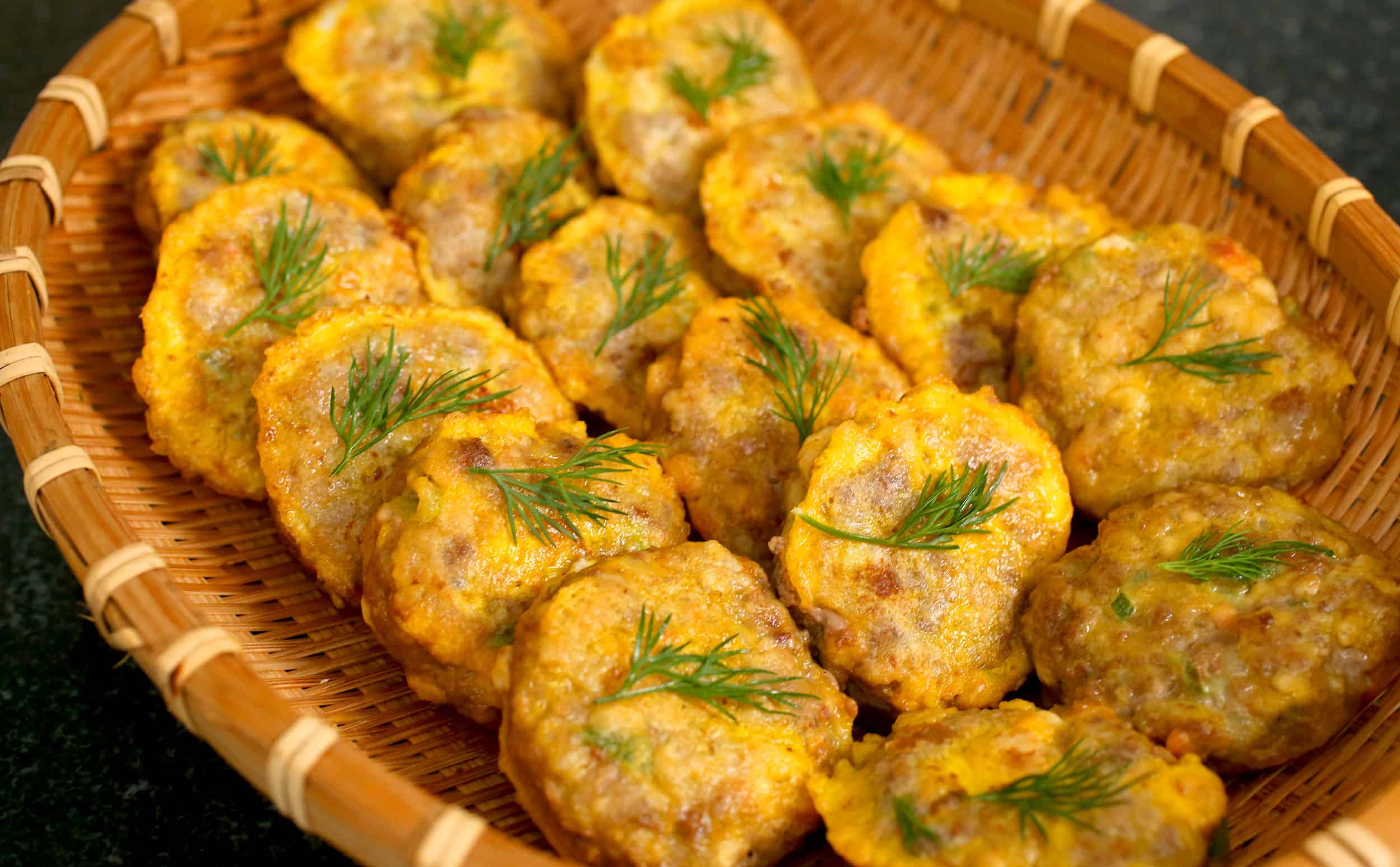 Food is, at its simplest, first coated in flour and eggs, then fried in oil. Ingredients such as thinly sliced beef, poultry, fish, and various vegetables are incorporated into Jeon. During the Korean Lunar New Year and Korean Harvest Festival, pancakes are usually cooked every year, although they are eaten throughout the year on a regular basis.

Shredded beef (yukjeon), oysters (guljeon), kimchi (kimchijeon), and green onions are made from some of the most common Jeon varieties (pajeon). Jeon with a spicy soy-based dipping sauce or a refreshing cucumber salad is recommended for serving.