When it comes to Korean street food, Tteokbokki or Ddeobokki or Korean spicy rice cakes are among the most common dishes. Spotting this dish is very simple. The cakes are long, white and cylinder-shaped and have a thick, flaming hot sauce. The combination of fish cakes, boiled eggs, and scallions is typically the most common type of Tteokbokki. You wonder if it’s a little bit too hot to manage as you chew along, but then it’s too late because you already find yourself addicted to this dish.

If you are looking for a true experience of Korean street food, then Odeng should certainly be on your list. The Korean fish cake, or Odeng, is a seasoned fish paste mixed with starch, flour, rice wine and other spices. The most common form is Odeng, served with a soft, tasty broth. Different forms of serving Odeng are also available. For instance, you can get something much more filling and more robust when combining Odeng with chilies, gochujang, and green onion. It’s a perfect treatment for hangovers as well. Another popular form of Odeng is deep-fried Odeng. It’s extremely tasty, especially when paired with mustard and ketchup.

It is likely that there are as many ways to make fried chicken in the world as there are nations. When it comes to Korean street food, Chimaek is the Korean version of fried chicken and one of the must-eat things. 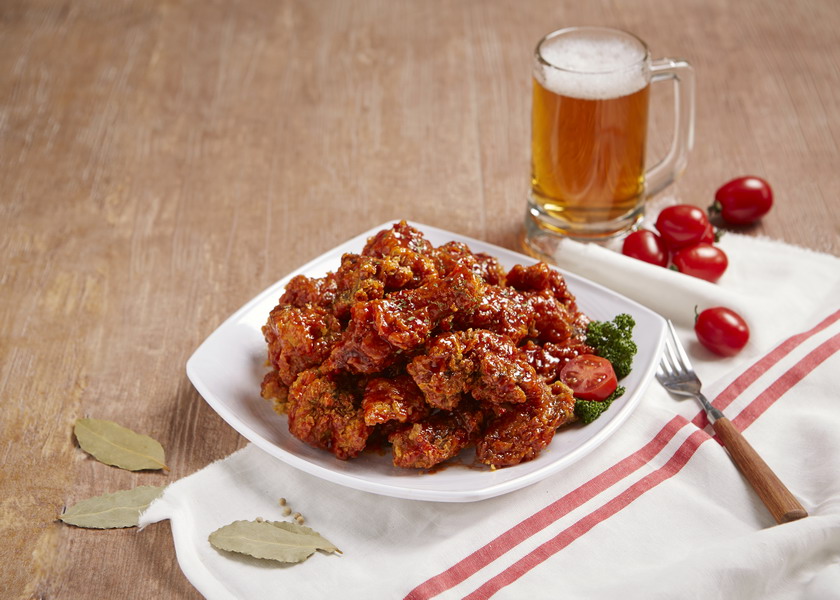 The thing that sets Chimaek apart from any other recipe for fried chicken is the sun. Just like any other Korean street food, expect it to be spicy when getting Chimaek. With every taste, it has spicy, crispy, thin skin that will heat you up and make you come back for another one.

When you buy it at food stalls, they usually cover it with honey-mustard sauce, which makes the heat more bearable if you’re not into hot food. Chimaek is usually served in a cup, along with french fries and rice cake (a Korean delicacy). Remember to get the large cup, so you can have more because you can never have too much Chimaek.

You can begin with Dakkochi or grilled chicken skewers if you want to “test the waters” before you jump into the Korean street food culture. It’s a simple introduction to the cuisine of Korea. 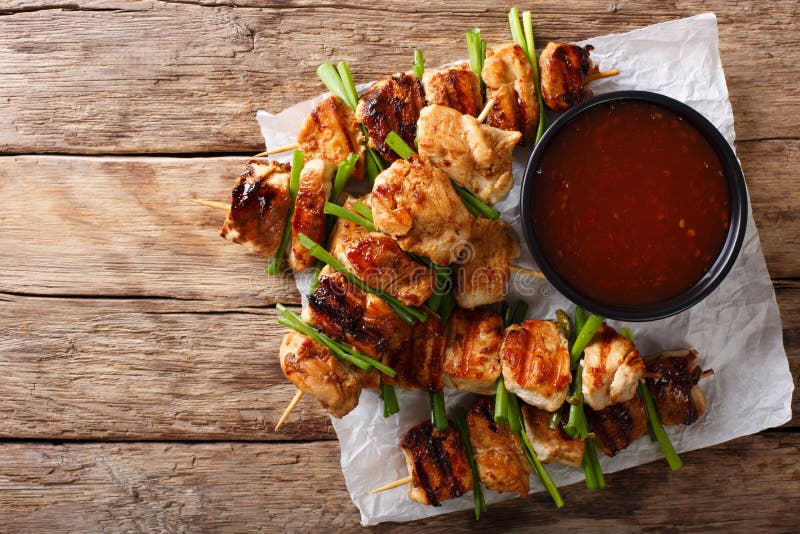 It is a very odd phenomenon, but very familiar. Parts of tender chicken are marinated and glazed before grilling with a plethora of sauces. Dakkochi is also best when combined with Korea’s many kinds of spicy sauces despite having great flavor on their own. A bite of Dakkochi combined with a sip of cold beer is truly an amazing experience.

In Korean folklore, Tokkebi is the name of evil creatures that normally use their magic to play tricks on people. But Tokkebi is a deep-fried hot dog covered with French fried pieces of Korean street food.

It seems that Koreans have a deep love for hot dogs and sausages. Perhaps that is why new and fresh recipes are continually coming up, and one of them is the deep-fried Tokkebi masterpiece. By rubbing the hotdogs with crushed ramen, some food stalls also lift the bar.

Pancakes are nice and all, but have you tried stuffed pancakes? Hotteok is the Korean adaptation of the ordinary pancakes. They usually fill it with all kinds of sweet or savory filling.

Although it looks and feels like a pancake, it actually kind of like a donut. It has various versions. For instance, the filling can be red bean paste, sweet potato, ground peanut, onions (yes, onion) or japchae (a form of noodle) and much more. You will find Hotteok much tastier when you eat it fresh from the pan. But be cautious, it will be very hot and the filling might burn your tongue.

Just imagine this fried potato, but on a stick. Tornado potato is one of Korea’s trendiest dishes. It comes from Seoul, to be precise, the Myeongdong District. The potato is skewered on a stick in this bowl, sliced thinly into the shape of a tornado. For it to carry flavored powder, the cut is thin enough. 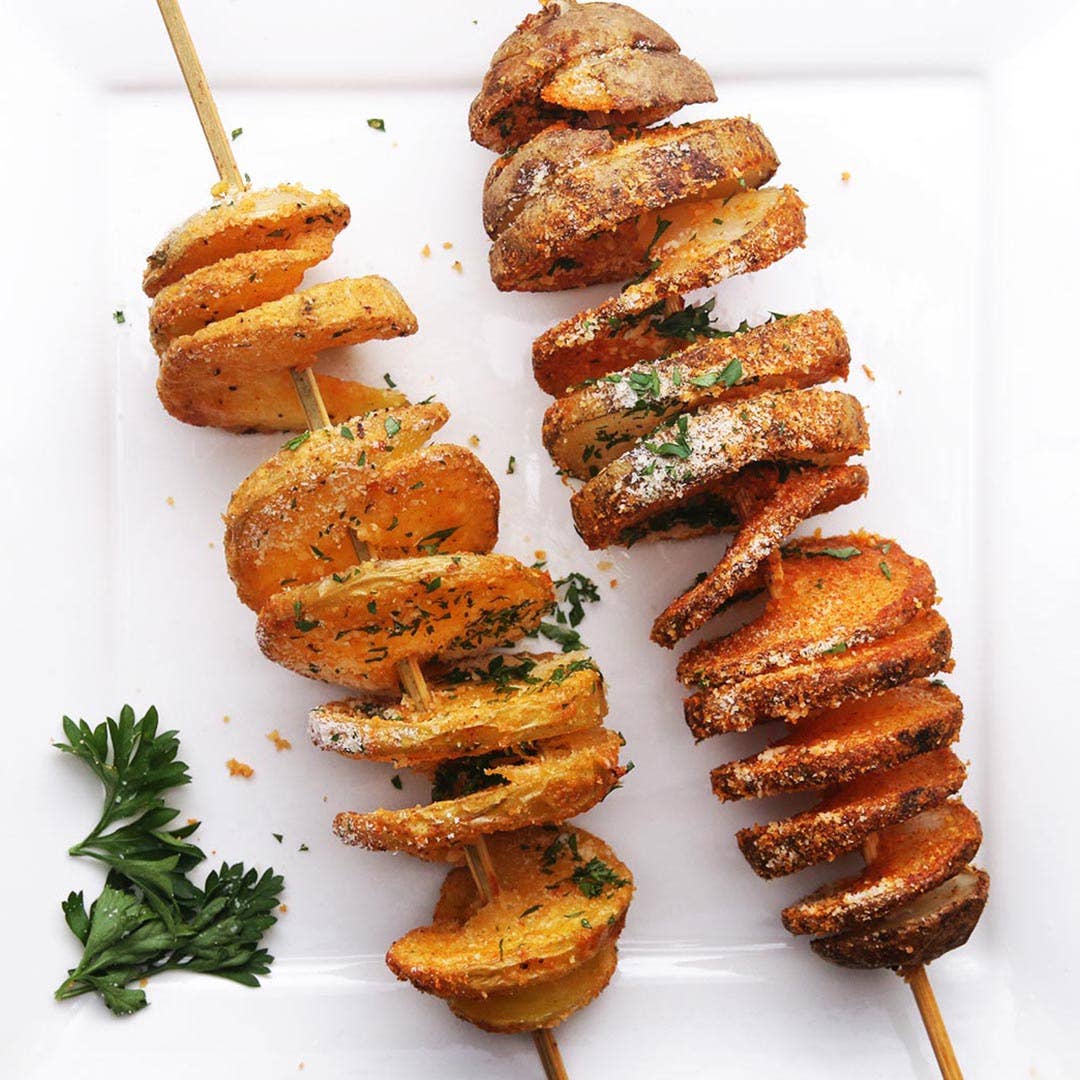 In Bangkok and Manila, the dish was a spectacular success. Barbecue, cheese, and salt are the popular flavors of the dish. If you want to, you can mix it with all forms of sauces.

Let me be clear here. Do not confuse “Soondae” with “Sundae” when a local tries to offer you one. Trust me, it’s completely different from the icy-cold, sugary treat. You can imagine Soondae as the Korean street food version of blood sausage. It’s truly a delicacy. Some may think that the idea of eating pork blood is disgusting, but the dish is the favorite of many people. 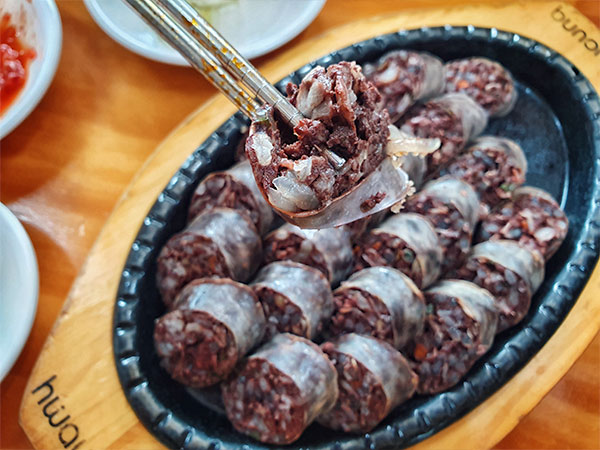 The Korean have their own way of preparing this dish, to make it different from its relatives. They mix it with glass noodle or sticky rice and then the sausage will be either steamed or boiled. Soondae usually has the side dish of pork innards and gochujang. In other places, they use seafood as the casing for the sausage. In Gangwon, people use fresh squids, in Gyeonggi they use dried squid. They also use Alaska pollock as the casing, making the Soondae quite bizarre. Don’t worry, before serving, people slice the trotters into bits. But if you like, you can just dig in Who am I to judge?As Jokbal is usually shared by several people, they generally serve it in large portions. Due to the fact that it is greasy and has a strong flavor, Korean diners consume it as ssam (wrapped in a piece of lettuce and dip it in sauces).

Jokbal is considered an Anju (food usually eat with a bottle of alcohol), thus it’s often accompanied with soju. Vendors serving Jokbal frequently offer both a regular and a spicy version. There are other variations of the dish as well. Busan-style naengchae jokbal for example, people often serve it cold and garnished with chilled vegetables.

Another version of the Korean pancake is Pajeon. Depending on the version of the dish, the batter includes eggs, wheat flour, rice flour, scallions, and several other ingredients. One of Pajeon’s most common toppings is beef, pork, kimchi, shellfish and other seafood. There’s one thing when you look at a dish that certainly stands out. There are hundreds and lots of scallions. By first frying a large amount of scallions in the pan, they make the bowl. Then they continue to add the batter before topping it with more scallions. The chef then flips it over to finish the dish. 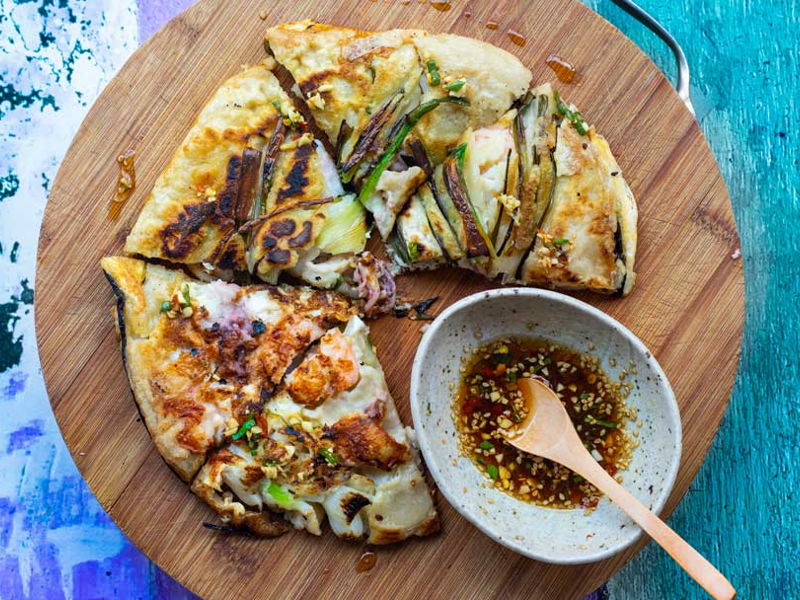 There are plenty of Pajeon’s adaptations. Among them, Haemul Pajeon is one of the most common. With many kinds of seafood as a topping, it is Pajeon. There is also Dongnae Pajeon, which mixes meat and seafood as its topping.

Gimbap or Kimbap is a Korean street food item made from cooked rice and other ingredients rolled in sheets of dried laver seaweed. People often slice the roll into bite-sized pieces before serving. If you come to Korea and leave without having tried Gimbap then it’s really a regret.

The most common form of Gimbap uses short-grain white rice, while some other variations use brown rice, black rice, other kinds of grain can also serve as filling. Alongside the rice, the filling may also include cheese, squid, carrot, egg, tuna… with sesame seeds sprinkled on top.

Some may think that Gimbap is similar to a sushi roll, but they’re very distinctive in their own ways. Rice in a sushi roll is often mixed with vinegar, while Gimbap’s rice will be mixed with sesame oil. Another difference is the filling, sushi roll will have fresh filling such as seafood, mushroom… and Gimbap’s fillings are cooked.

With chunjang (sweet bean sauce), pork and vegetable topping, Jajangmyeon is a noodle dish. The dish, which has seafood as its topping, also has a version. It’s very chewy, it’s rich, it’s flavorful and it’s saucy. It’s the Korean street food version of spaghetti, you might say. This black noodle will spook you at first glance. But believe me, if you can only get over its presence, it is completely worth the experience.

In Korea, people eat this dish the most on “Black day”. This is Korea’s unofficial holiday and mostly single people celebrate this holiday. People who didn’t receive gifts on Valentine’s day and White Valentine will gather on April 14 and have this dish together. Besides eating food with black color, people also wear black clothes.

After filling your stomach with meat and vegetables, I think it’s time to start having some desserts. And in Korea, especially Seoul, one of the best desserts that you can have is ice cream. There are so many kinds of ice cream in Korea and to find a flavor that you won’t like would be a difficult mission. If you’re into ice cream and want to try every flavor then you should allocate a few days just to taste them.

One of the more modern forms of ice cream is the Cane ice cream. It’s a new addition to Seoul’s, already massive, ice cream collection. It has a huge cane-shaped rice cracker filled with ice cream. Then, there is their massive sundae twirl in many flavors. Another favorite is ice cream with fish-shaped waffles casing, it’s cute, it’s refreshing, and it will definitely satisfy you.

Prepare to have shaved ice like never before if you like shaved ice. Basically, this dish is shaved ice with red beans, rice cakes, and topping syrup. People always enjoy it in hot summer days, but you can have it at some cafes all years round. 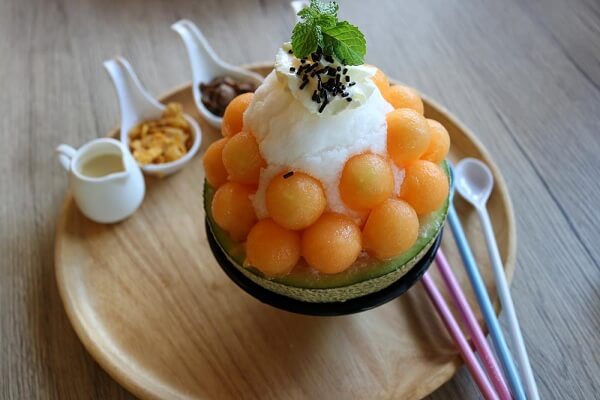 Over the years, there have been so many variants of Patbingsu. Coffee and Patbingsu green tea with ice cream, fruit as a topping, are some of the trendy varieties. They will also place it in a cup to serve as a beverage. If you want to try something a bit milder, just try the classic Patbingsu. Nothing can go wrong with the classic. Patbingsu and Kimchi are two of Korea’s greatest gifts to the culinary world. With Kimchi at the hot end and Patbingsu and the cool end of the spectrum. You can have a cup or a dish of Patbingsu at food stalls or cafes in Korea.